The National Health Service (NHS) in England has announced that the health system will make a plan to reach net zero emissions ahead of the national target (2050). Already the first major economy in the world to pass a law to end its contribution to climate change, NHS England’s latest campaign For a greener NHS will aim to balance any emissions generated through emission cutting or removal efforts – so called ‘net zero’.

The changing climate is leading to more frequent heatwaves and extreme weather events such as flooding, including the potential spread of infectious diseases to the UK. Almost 900 people were killed by last summer’s heatwaves while nearly 18 million patients go to a GP practice in an area that exceeds the World Health Organisation’s air pollution limit.

“The health sector is on the frontline when it comes to dealing with the ever-increasing effects of climate change, and yet the sector is contributing to the problem through greenhouse gas emissions from its activities, undermining the health of the very communities it serves.” 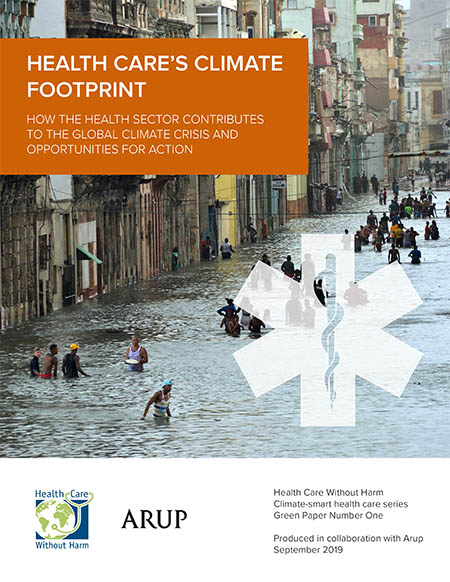 In the announcement, NHS England Chief Executive Sir Simon Stevens said that the NHS and its staff will take action to tackle the climate “health emergency” this year, helping prevent illness, reduce pressure on emergency departments, and save tens of thousands of lives. The initiative follows the launch of the Climate Assembly UK last week, where discussions were held on how the country can reach net zero emissions.

This announcement provides a shining example of how a national health system can respond to the goals of the Paris Agreement and the UN’s sustainable development goals (SDGs). By committing to net zero and demonstrating that this can be done, the NHS will provide a model for other health systems in Europe to emulate, leading the way for the rest of the world to follow.

As the health and environmental impacts of climate change become ever clearer, the healthcare sector is increasingly recognising the opportunity to lead the way in tackling this global crisis and take immediate action to reduce its own carbon footprint.

The causes of climate change and air pollution are often the same; For a greener NHS will therefore help to address both. Air pollution is linked to killer conditions like heart disease, stroke and lung cancer, contributing to around 36,000 deaths annually.

“While the NHS is already a world leader in sustainability, as the biggest employer in this country and comprising nearly a tenth of the UK economy, we're both part of the problem and part of the solution.”

The healthcare sector is a large-scale procurer of food, energy, pharmaceuticals, and chemicals – considering the products they choose and how they purchase and use them can have a huge positive impact on patient wellbeing and healthcare costs, as well as reducing environmental harm. In Europe, 75% of healthcare’s climate footprint is attributable to indirect emissions - a significant proportion of which emanates from the supply chain.

By mobilising the 1.3 million staff to take action and the creation of an NHS Net Zero Expert Panel chaired by Dr Nick Watts – NHS England will set a practical, evidence-based, and ambitious route map to reach net zero.”

“Everyone who works in healthcare has a responsibility to take action on the health emergency posed by climate change, and I encourage all NHS staff to join the campaign to feed in their ideas and help drive this forward.”