A guest blog from Irish Doctors for the Environment.

COP26 at Glasgow has brought unprecedented media attention to the climate crisis. World leaders, policymakers, and nongovernmental organisations descended upon the Clyde with the hopes of billions around the world pinned to their agendas. However, there was an additional contingent of travellers to Glasgow, those without the lanyards, the political connections, or social capital to make known their feelings and frustrations. Already cited by Greta Thunberg as “the most exclusive COP yet”, the many barriers to access did not stop activists young and old, school children of all ages, healthcare professionals of all disciplines, or indigenous representatives of all colour and creed from making the often arduous journey to make their voices heard.

The road to Glasgow

Irish Doctors for the Environment (IDE) also heard this call and five of us made the trip to bring our message to the global political leadership - the climate crisis is a real and present health crisis.

You may be wondering, and yes, we travelled by electric car. Not only is electric car charging free in Scotland, but also powered by bountiful, clean, and renewable wind energy. Before we even arrived in Glasgow, we could already see what a green and sustainable future may look like. 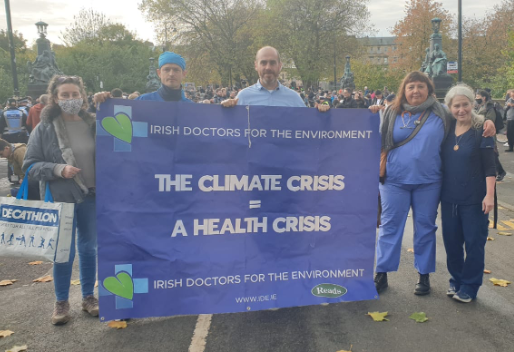 With years of experience in advocating for planetary health and an understanding of how our health depends on complex natural systems, our delegation travelled to Glasgow for one pressing reason. Cumulative emissions have pushed several planetary tipping points to their limit; we need to stop emitting now. We have perhaps only 10-15 years of summer Arctic ice left before the polar regions, which are warming faster than anywhere else on the planet, go from global cooling to global warming mechanisms. This is a catastrophic tipping point.

Meeting with other healthcare organisations, we all recognise that future COP meetings need to be viewed through a health lens. We held promising discussions with Irish Department of Health delegates and have planned many collaborations with our IDE working groups, such as active transport, sustainable diets, healthcare sustainability, air quality, curriculum development, and green/social prescribing. There is much to be said for meeting other healthcare professionals in person, and sharing respective successes and frustrations beyond emails or zoom calls. Moreover, hearing real-life experiences of doctors from across the globe, who are treating victims of heat waves, respiratory diseases from poor air quality, displacement, war, starvation, and eco-anxiety, has meaning beyond blogs and books.

Meeting with other healthcare organisations, we all recognise that future COP meetings need to be viewed through a health lens.

Throughout the conference, it became abundantly clear how many planetary health issues revolve around social injustice, exploitation, and disregard for indigenous groups. While indigenous peoples make up five per cent of the global population, they are the guardians of 80% of our biodiversity that our lives depend upon. Their story was a central theme of the Fridays for Future march, with relatives and victims of climate injustice taking the stage to tell their stories and demanding recognition and accountability. The throngs of protesters in Georges Square applauded in solidarity before Greta Thunberg took to the stage to demand “no more blah blah blah”. With 50% of all emissions produced since the first COP meeting in 1995, continued subsidies for fossil fuels, and biodiversity loss unabated, her scathing remarks resonated with the thousands of protesters in attendance.

The atmosphere on the Glaswegian streets was a 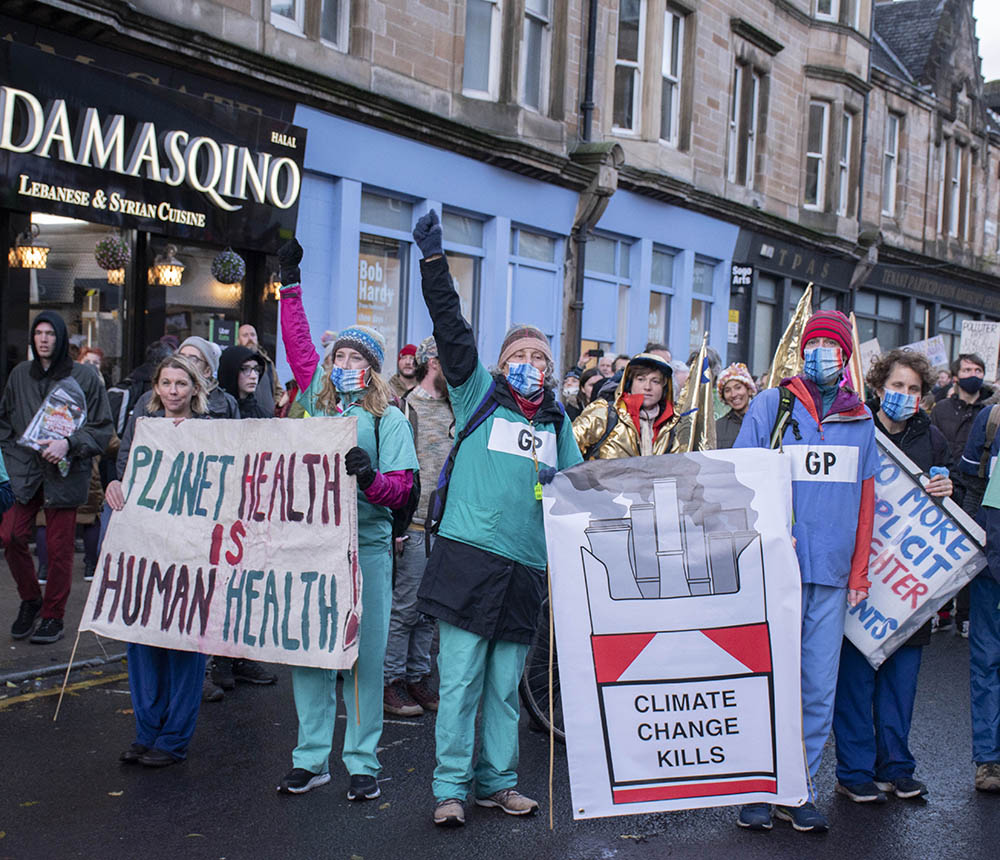 stark dichotomy to the sterile meetings within the Blue Zones where deliberations were taking place. The Fridays for Future march and Health Bloc march were full of character, colour, and noise. There was uplifting enthusiasm and engagement with children and teenagers. Their posters varied from harrowing to humorous, including “I don’t know what’s hotter, the planet or me?”

The delegation ended with attending the Climate and Health conference chaired by the editor of the British Medical Journal. Former Irish president, Mary Robinson, opened the proceedings; she stressed the disproportionate impact of climate change on females of colour and the importance of a just transition. Sir Andy Haines asked healthcare professionals to step out of their comfort zone to speak and engage with other sectors (energy, agriculture, finance) suggesting that such are the profound health implications of their actions or inaction - they are de facto health ministers. Finally, former Australian Prime Minister, Julia Gillard, reminded us that we now know enough to act; the choice is not if but when.

With Ireland still battling a surge in COVID cases, we left Glasgow inspired by fellow healthcare professionals and the enthusiasm of the next generation.

Ironically, COP26 was delayed by one year because of a pandemic, one that has many origins in the climate crisis. With Ireland still battling a surge in COVID cases, we left Glasgow inspired by fellow healthcare professionals and the enthusiasm of the next generation. Cross talk with other disciplines will lead to cross pollination of ideas and future collaborations. More importantly, it should prevent climate despair, which can have the same resultant inaction as climate denial. While our leaders have made many promises that offer hope, Irish Doctors for the Environment will continue to hold our politicians to account.