The final words of French Foreign Minister, Laurent Fabious were: "Looking out to the room I see that the reaction is positive, I see no objections. The Paris agreement is adopted." [1] 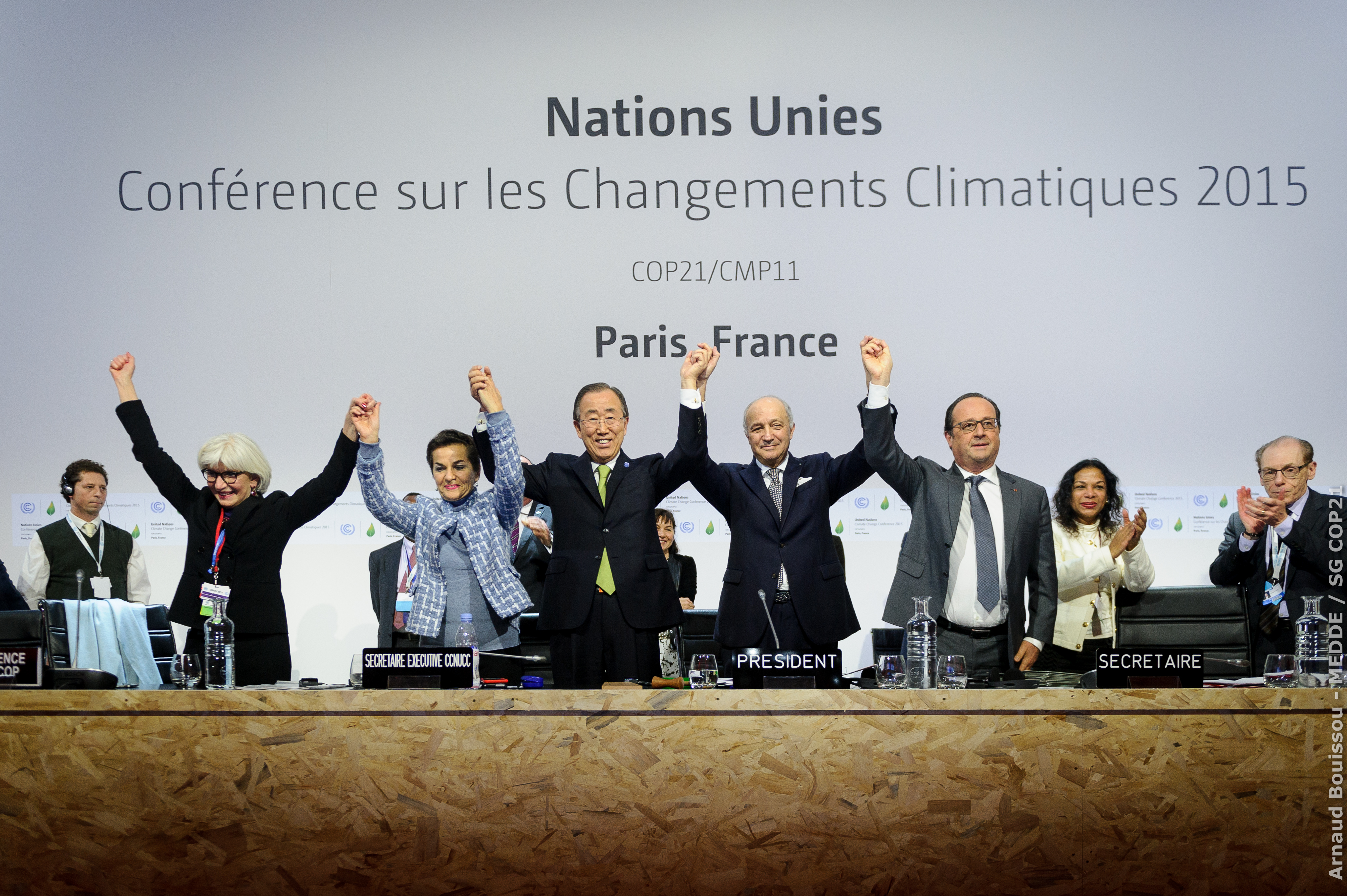 COP21 has come to an end. Now, it is not about the road to Paris, but rather about the long road ahead of Paris. Climate action needs to intensify by all actors. With 195 nations on board, the Paris Treaty is the first time there has ever been a global agreement to act on climate change. Reaching this agreement was a milestone for the international environmental community. However, the agreement is merely a partly-legally binding mechanism to help guide us in the right direction. Now, it is up to each nation, sector, company, organisation and individual to follow through on the commitments, and to turn ambition into measurable action.

The Paris Agreement has caused a great deal of mixed emotions in the environmental community. While the achievement of ending COP21 with a climate agreement is in itself a massive accomplishment, there is still a lot of concern surrounding many elements of the 31-page long text. The greatest criticisms surround the 2°C target, which is not enough to protect the world from many of the catastrophic impacts of global warming. The Carbon Brief has analysed the final text, and shows nation’s reactions to the Paris agreement. Climate Tracker has produced an infographic illustrating their review of the final Paris agreement, addressing the points of greatest concern.

Will the EU maintain its leadership role?

In this short interview with Carbon Brief, Arias Cañete praises the leadership role of the European Union throughout COP21, and affirms that EU countries will work together in collective action to reach their joint objectives. 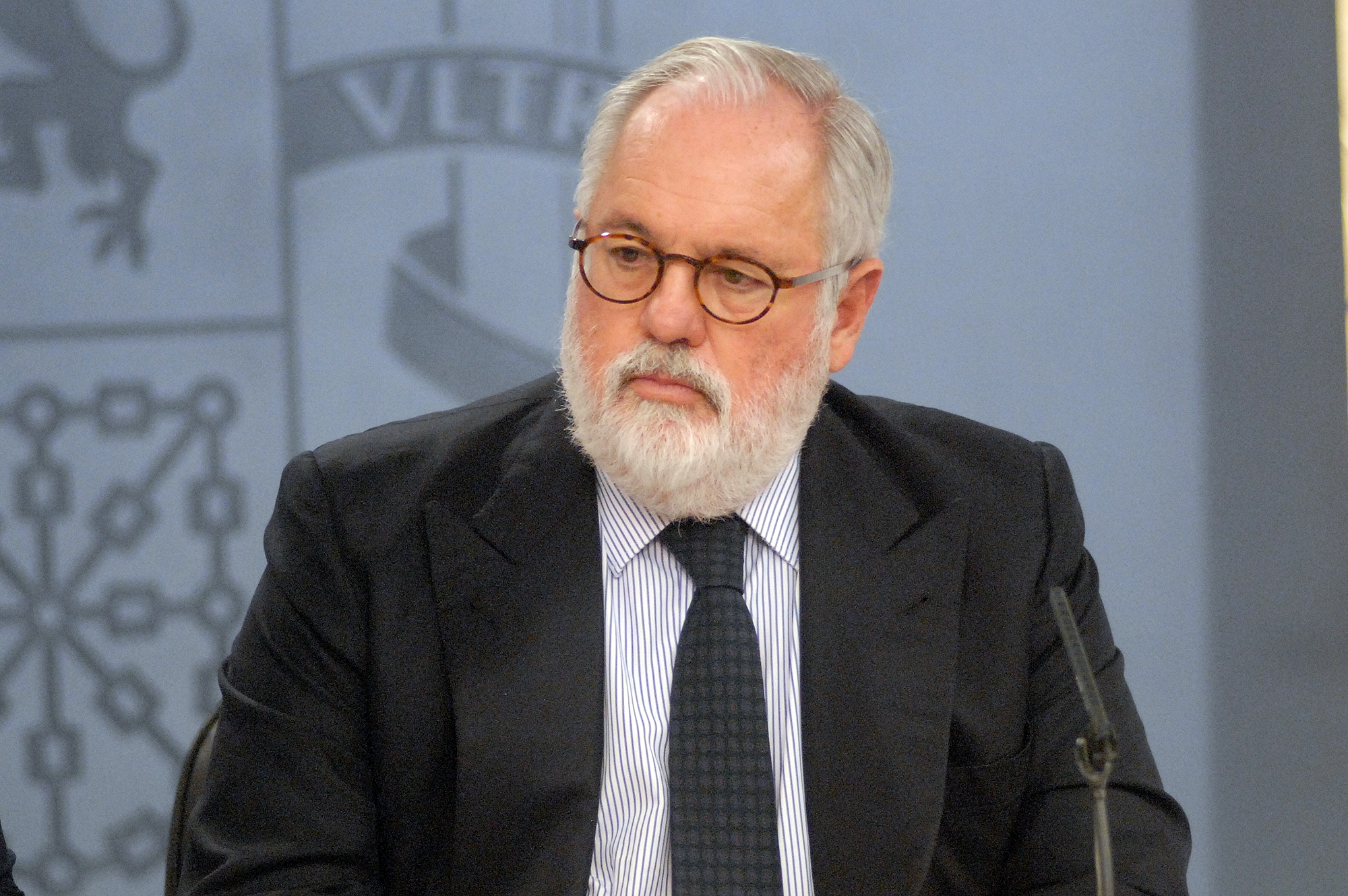 It is widely acknowledged that the Paris Treaty will not be enough to keep warming below 2°C, which is why a review mechanism to raise ambition is a key element of the agreement. In order to achieve the global targets of keeping warming under 2°C, raising ambition, and achieving net zero CO2 emissions in the second half of the century, countries with greater responsibility and capacity (such as the EU and majority of developed nations) must act faster than the rest, in order to reach zero emissions sooner.

Current Intended National Determined Contributions (INDCs) are leading us towards a global temperature rise of 3°C or more. The EU has a lot of work to do, starting with revising its current and upcoming policies since they are not in line with the 2°C/1.5°C pathways. The EU must be quick to raise their ambition, and to implement their commitments into European and national legislation.[2]

The EU has a responsibility to meet its own targets in due time, in order to guide the world towards climate action.

Here you can find the EU COP21 Press Release

The Paris climate deal signalled the end of the era of fossil fuels. Thus, setting up adequate national policies should be at the foundation of all nations’ efforts to achieve a 100% renewable energy future. According to new research by Sandbag and CAN Europe, Europe must cut coal power carbon emissions three times faster than their current plans intend to, in order to avoid the worst impacts of climate change. 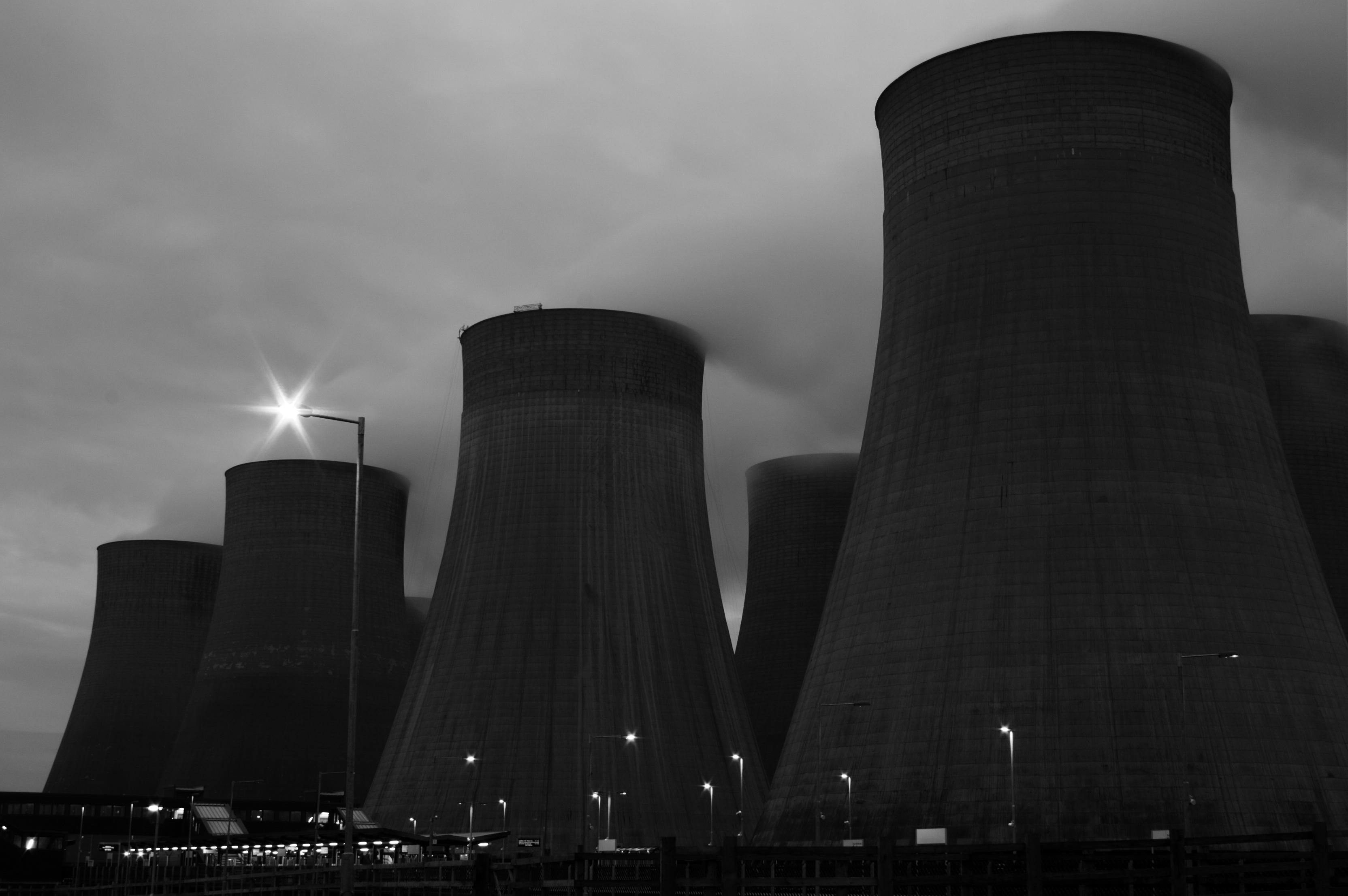 Since the Paris Treaty was passed on December 12th, there has already been a curb in the shares of fossil fuel companies. However, in the longer term, it is feared that the “not legally-binding” aspect of the treaty will affect the transition towards renewable energy.[3]

For this reason, nations have the responsibility to pave the way for renewable energy economies. The EU needs to make urgent reforms to its energy markets in order to drive out the most polluting sources of energy (in particular coal), to create a market for new clean energy investment.[4]

E3G takes a closer look at what the Paris Agreement means for the EU energy union.

All eyes are on the EU to put pressure on Germany and Poland to end their coal extractions. At COP21, Poland directed their efforts towards the protection of the world’s forests. The Polish minister said that “economic growth may be reconciled with sustainable development, once a balance is struck between the carbon output and the absorption of emissions by forests and innovative technology.” [5] This focus on deforestation is essentially a strategy to avoid addressing Poland’s lack of will to divest from coal.

There is also pressure on Germany to achieve nuclear and coal phase out.  Clean Energy Wire covers a lot of media surrounding Germany’s efforts to divest.

The UK has been criticised for not being on track to meet its targets. The UK is focusing a lot of its attention on fracking and nuclear energy, while not doing enough to pave the way for renewable energy. Shale gas from fracking is being perused with the hopes that it will replace coal and help the UK meet its climate change targets.[6]

Health Care Without Harm in Paris

Health Care Without Harm attended the climate negotiations with a group of 14 staff from all regions. We participated in a number of health related side events at COP21, while also hosting two events focusing on Climate Change and Health on the sidelines of COP21.

HCWH brought together over 30 senior health system officials from the US, Europe, Asia and Latin America in a private, closed-door meeting in the oldest hospital in Paris, Pitié-Salpêtrière. The Roundtable was the first ever global gathering of health systems working on climate change. Participants discussed ways to accelerate carbon footprint reduction in the healthcare sector, while also discussing plans to scale up healthcare engagement on climate change. 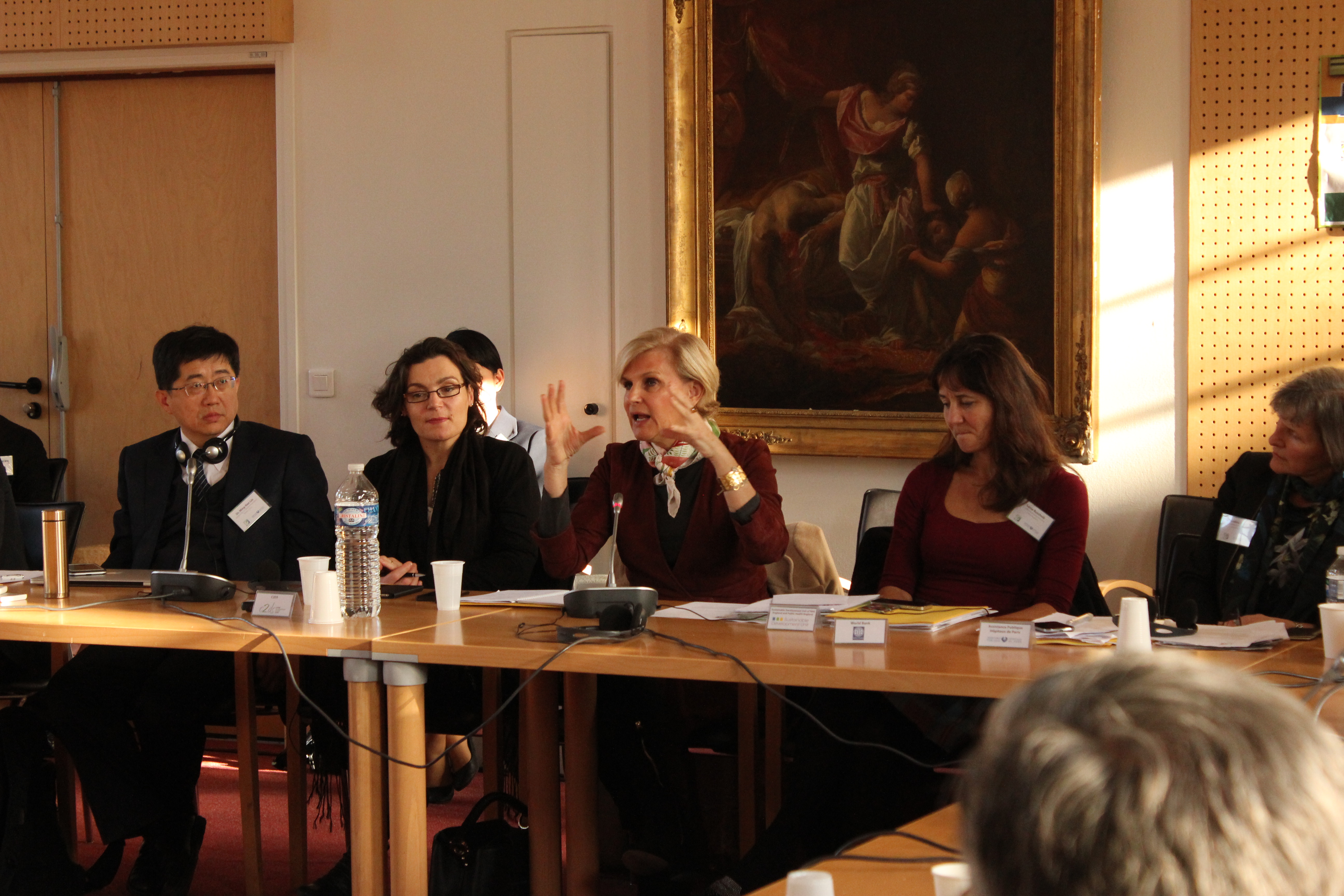 An exciting outcome from the roundtable resulted in three European health systems signing our Global Green and Healthy Hospital’s 2020 Climate Challenge. They were the global health care group BUPA, Vivantes Hospital in Berlin, and BUND (Friends of the Earth Germany), which represents a group of 25 low-carbon hospitals in Germany. 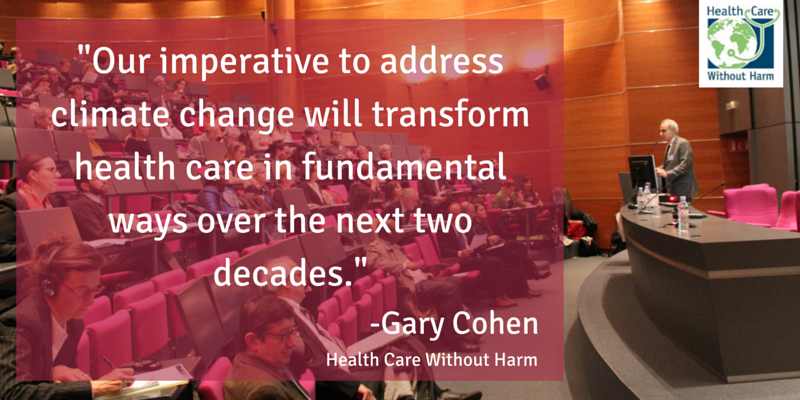 Health Care Without Harm co-hosted the International Conference on Climate Change and Healthcare along with the French Hospital Federation (FHF) and the French Federation of Private Non-profit Hospitals (FEHAP).

The day-long conference, which took place at the Georges Pompidou Hospital in Paris, brought together health care leaders from across Europe and around the world. Representatives from hospitals and health systems in France, Europe, the US, Asia, Africa and Latin America discussed strategies for reducing their carbon footprint, as well as healthcare leadership initiatives to protect public health from climate change. 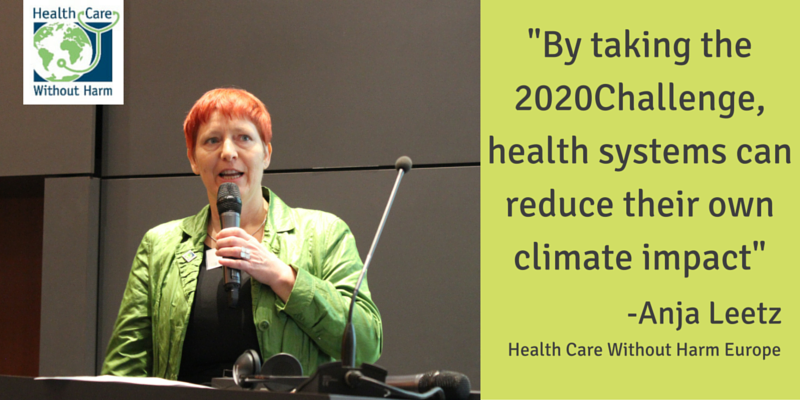 At the conference, we issued our First Annual 2020 Challenge Climate Champion Awards to 15 challenge participants from around the world for their achievements in carbon mitigation, adaptation and leadership. HCWH Europe’s member, The Sustainable Development Unit for the NHS, Public Health and Social Care in England was amongst the award winners. 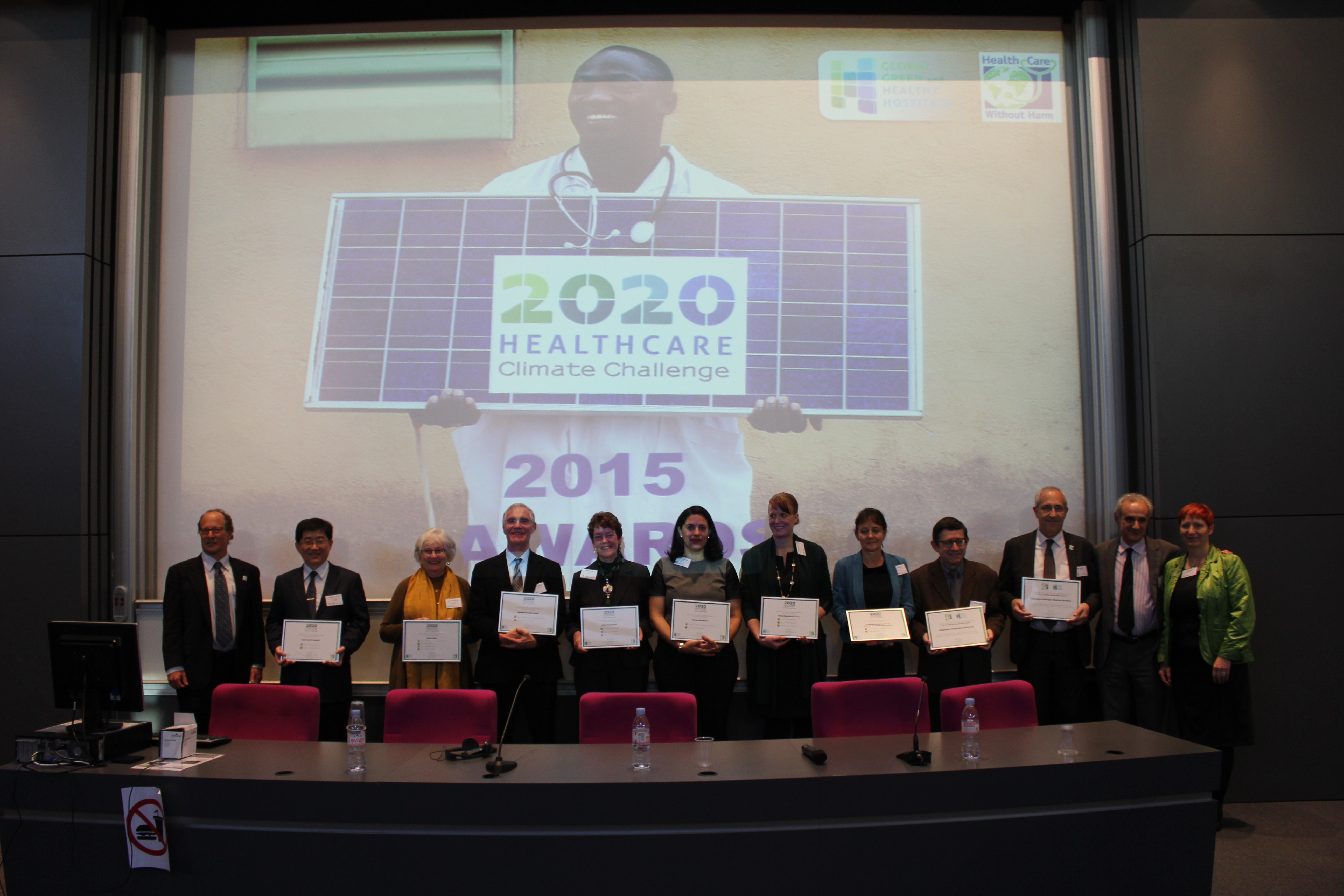 Participants from around the world: 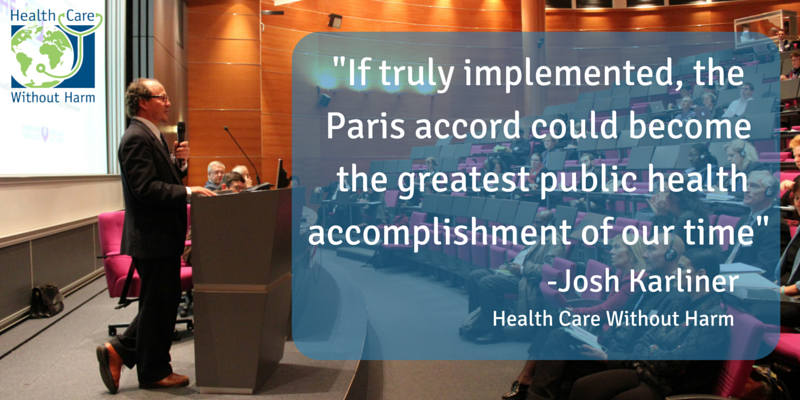 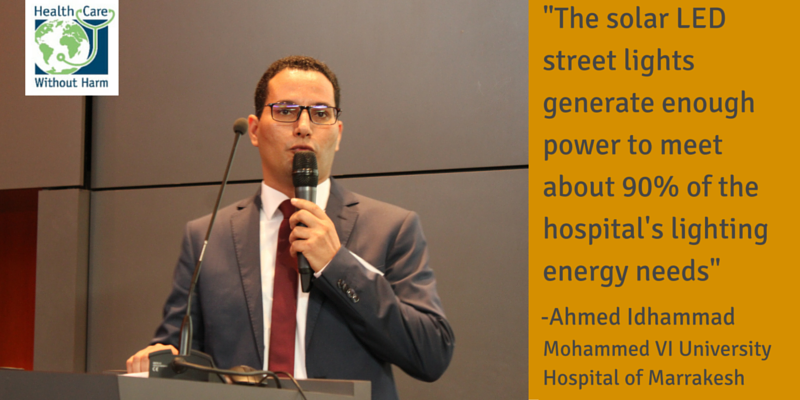 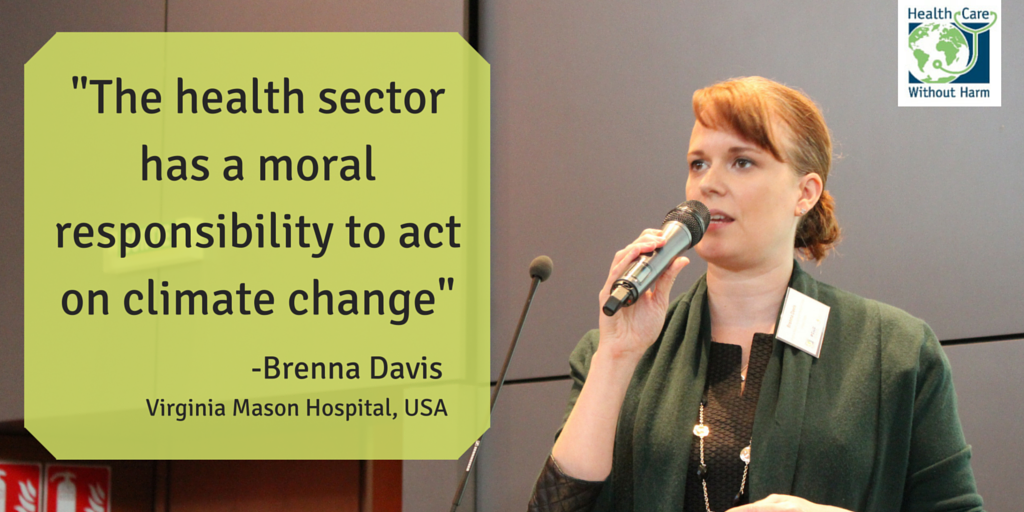 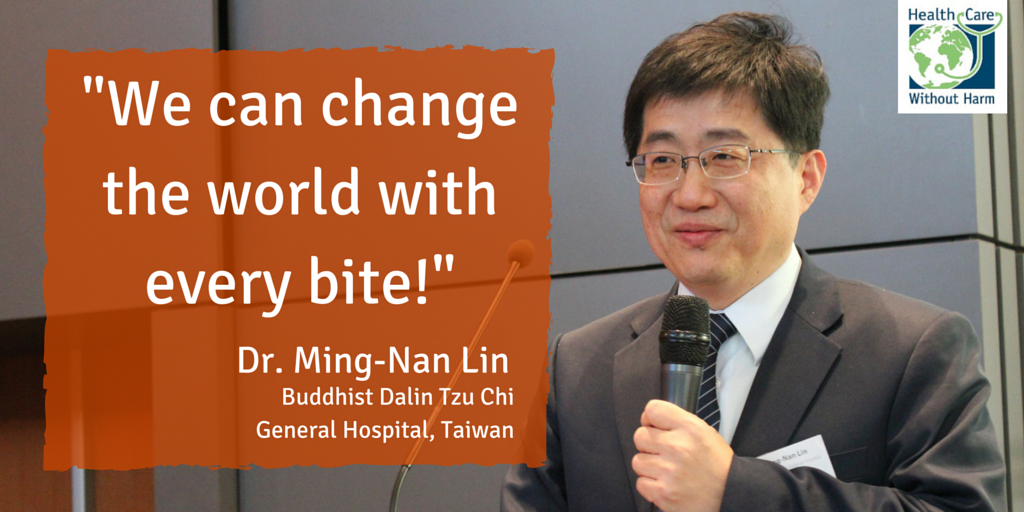 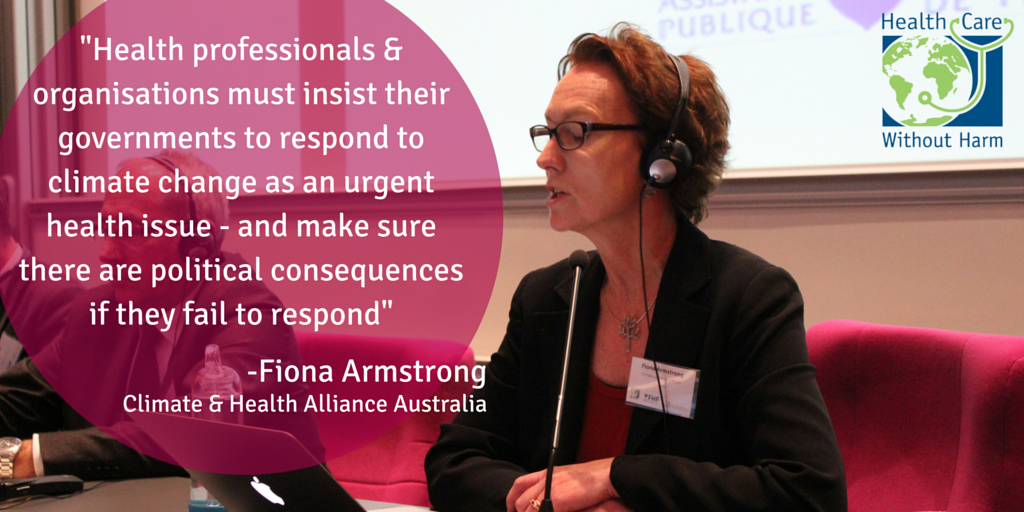 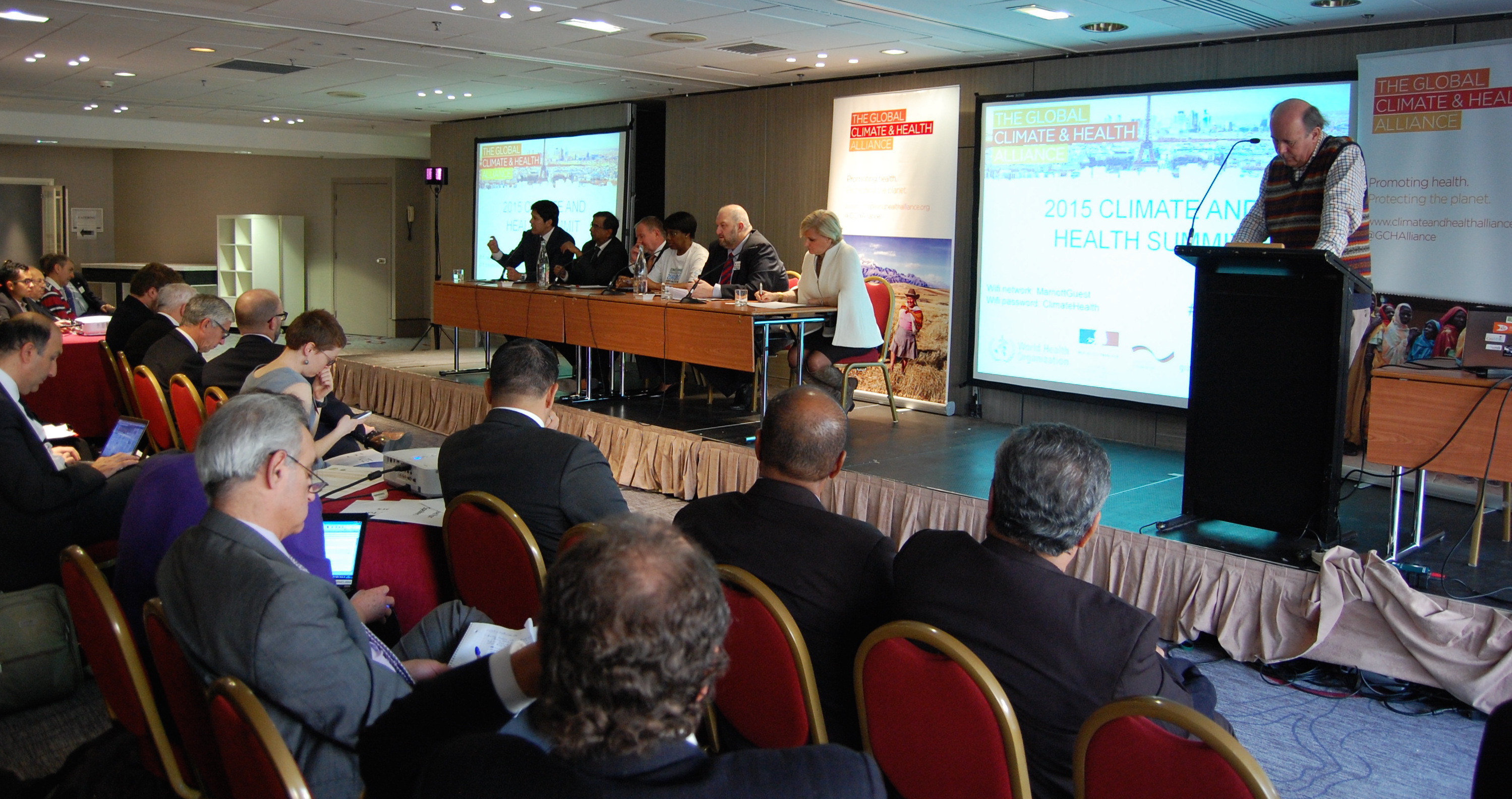 Moderator John Vidal from the Guardian

The Climate & Health Summit was hosted by the Global Climate & Health Alliance and the World Health Organization. Three HCHW representatives had a seat on panel, where they spoke out about the health sector’s responsibility to become a leader of climate action.

GreenTV documented the Climate & Health Summit. This short video features interviews with professionals who participated in the summit, including Health Care Without Harm Asia’s Renzo Guinto who spoke about the Philippine’s experience of health and climate change.

To read about what HCWH regions achieved in Paris, visit our global website.

HCWH Infographic: How does the health sector contribute to climate change?

Expectations Post-Paris: The UNFCCC has published an article addressing their expectations post-Paris. UNFCCC before and after Paris – what's necessary for an effective climate regime?

The Carbon Brief Resources: The Carbon Brief has produced a number of extremely useful and interactive resources to help us understand the process of COP21 negotiations, and its many complexities. Their final analysis of the Paris agreement breaks down the text into its different components. Their interactive graphic shows which countries belong to each negotiating bloc, and a party position grid demonstrating each groups’ position on each key issue. 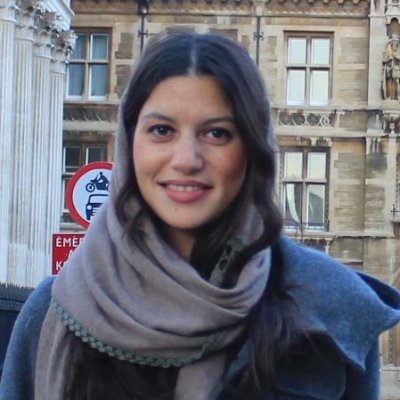