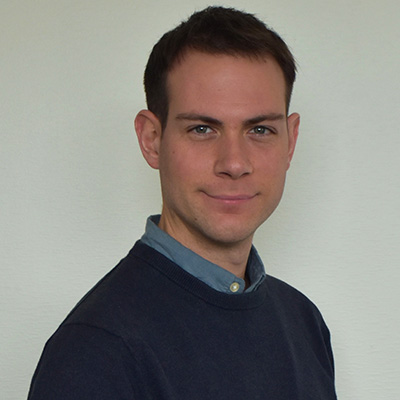 Sweden has a long tradition of working to combat antimicrobial resistance (AMR). In 1986, it was the first country in the world to ban the use of antibiotics as growth promoters in agriculture. It is therefore no coincidence that it has one of the lowest rates of drug-resistant infections in Europe.

Eager to better understand why this country was scoring so high in the fight against AMR, in mid-October I packed my suitcase to travel to Stockholm and Uppsala for a series of meetings with members and key stakeholders working on AMR and pharmaceutical pollution.

It wasn’t the first time I was going to Sweden. Ten years ago I had already discovered its peaceful capital city; strolling around clean streets, tasting delicious köttbullar med gräddsås (meatballs with cream sauce), and experiencing early sunsets.

There is certainly more to Sweden than its famous 70s music band and its ready-to-assemble furniture company – it is home to a culture of openness where work-life balance is paramount. This mindset is best illustrated by fika – a time to share coffee, treats, and conversation with colleagues and friends.

Stockholm is an important business hub in the Nordic region, yet nature is everywhere; parks and green spaces make up 30% of the city area. Even in its metro stations, you will see videos of pristine landscapes rather than banking or corporate adverts. 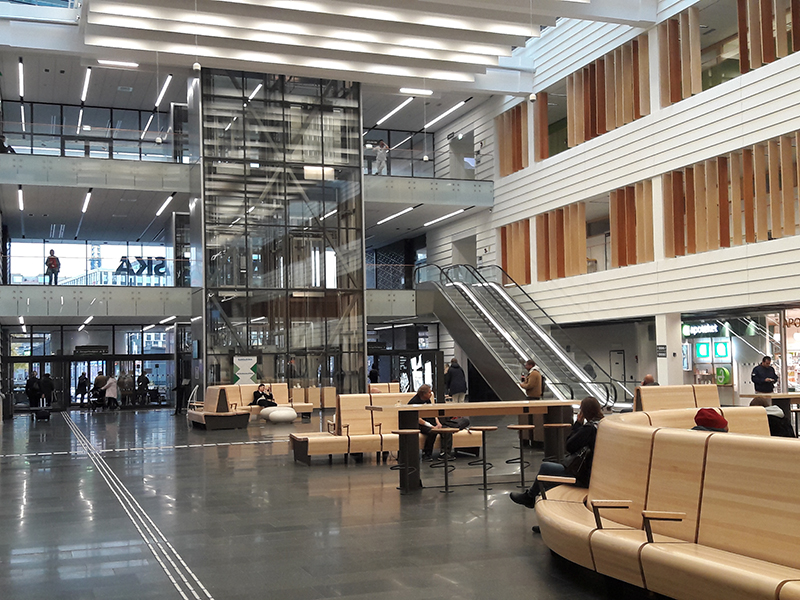 My first meeting brought me to Karolinska University Hospital, one of Europe’s premier healthcare facilities and a long-time HCWH Europe member in Sweden, where I met Gustav Eriksson, Head of the Environmental Department, and Filippa Nyberg, Chief Medical Officer.

I was welcomed to their new, state-of-the-art facility in Solna – its large entry hall with wooden chairs, picture window, and huge artwork cannot fail to impress. Within the hospital, staff travel along corridors on scooters and small robots help transport materials between hospital wards.

During an insightful discussion on strict infection prevention and control measures within the hospital, I was introduced to Strama, the Swedish Strategic Programme Against Antibiotic Resistance, which provides feedback to healthcare professionals on antibiotic prescribing.

I then had the opportunity to visit a hospital ward that uses an automated dispensing cabinet; it allows pharmaceuticals to be stored and dispensed close to the point of care whilst automating drug supply, controlling distribution, and preventing waste.

My hosts finally presented the hospital’s successful waste management programme. Each ward has its own waste management room with clear labelling for bins and direct access to disposal facilities. Pharmaceutical waste is disposed of in secured yellow bins that are sent for incineration.

Travelling by bus to another side of the city, I rode through Östermalm, one of Stockholm’s most populous neighbourhoods, to catch up with an on-going project to curb pharmaceutical manufacturing pollution led by the Stockholm International Water Institute (SIWI). 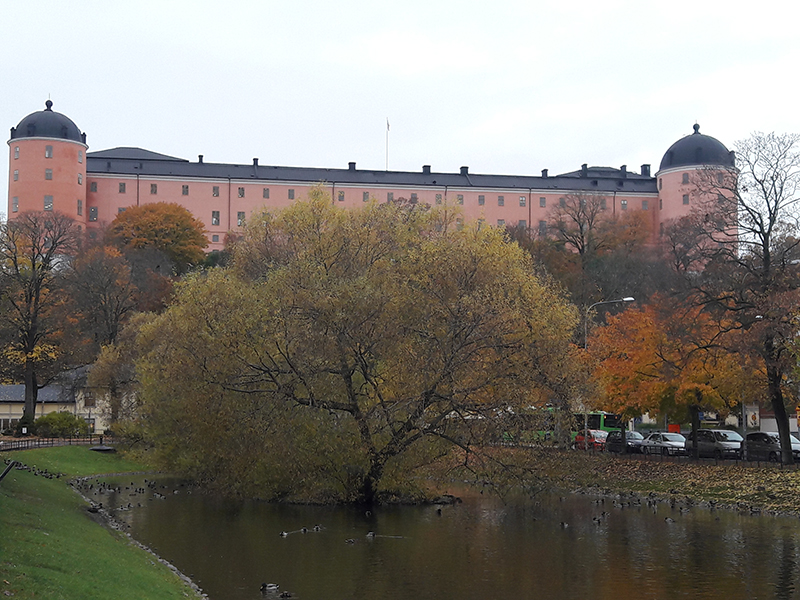 The following day, I woke up early to catch a morning train to Uppsala in the north of Stockholm. It was a one-hour tranquil ride through the Swedish countryside and its agricultural lands, far away from the buzzing morning activity of the capital.

After a short meeting with ReAct – Action on Antibiotic Resistance, I walked through the city park to Uppsala University Hospital, Sweden’s oldest university hospital, where I met with Therese Olsen, Environmental Manager, to talk about risks linked to pharmaceuticals in the environment. 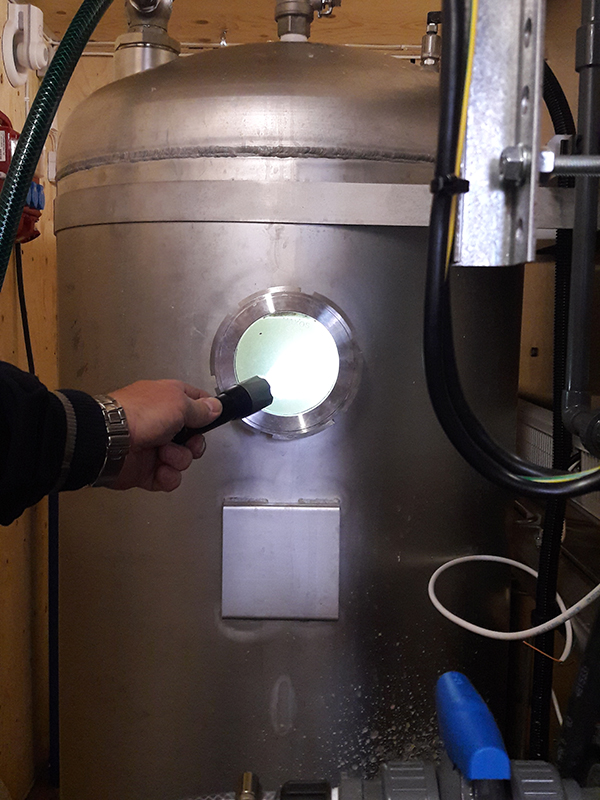 The Region Uppsala’s environmental programme has identified pharmaceutical pollution as a key environmental risk to a healthy and non-toxic environment and requires Uppsala University Hospital to curb the presence of antibiotics in its wastewater by 20% between 2018-2022.

To achieve this objective, the hospital has developed a pilot ozone wastewater treatment container that I had the opportunity to visit; it studies the effectiveness of ozone treatment to neutralise antibiotics in wastewater at various periods of time.

I crossed the campus to enter the impressive building of Uppsala University’s Department of Medical Sciences where I met with Åsa Melhus, Professor in Clinical Bacteriology, who painted a rather gloomy picture of AMR trends globally.

We discussed strategies developed at hospital level to address AMR in Region Uppsala (e.g. use of narrow-spectrum antibiotics, building of single-occupancy rooms, etc.). Other topics of conversation included Sweden’s national action plan on AMR and Strama’s role in providing guidelines to prescribers.

I then crossed the road to meet the coordinators of the Uppsala Antibiotic Center – a multidisciplinary centre for research and innovation hosted by Uppsala University, that supports awareness, education, innovation, and research on antibiotic resistance.

Most notably, the centre promotes multidisciplinary research on AMR within a network of 14 PhD candidates and supports three researchers working on projects within the areas of new antibiotics, new diagnostics, and new economic models.

Before catching the train back to Stockholm, I met with Stefan Berggren, Director of the recently launched Knowledge Centre for Pharmaceuticals in the Environment – a platform for cooperation and dialogue among Swedish stakeholders on pharmaceutical pollution. 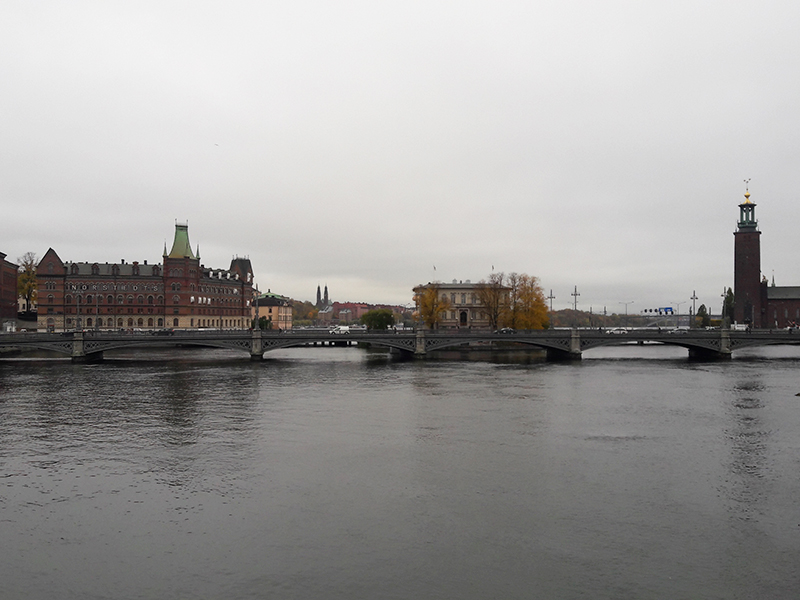 On my last day in Sweden, I met with Johanna Borgendahl and Helena Ramström from Region Stockholm – one of Europe’s largest healthcare providers, to talk about best practice implemented in the region to address the issue of pharmaceuticals in the environment.

I was introduced to the Wise list, a list of recommended essential medicines for common diseases based on scientific evidence regarding efficacy and safety, pharmaceutical suitability, cost-effectiveness and environmental aspects. [The 2015 edition is available in English].

For comparable medical effect and safety, the Wise list recommends pharmaceuticals with the most favourable total cost and the lowest environmental impact. In Region Stockholm, 85% of prescribed pharmaceuticals are in accordance with its recommendations.

Region Stockholm also provides information on the environmental impact of pharmaceuticals through its online database Janusinfo for the Drug and Therapeutics Committees. In addition, it aims to help hospital and healthcare professionals working to reduce emissions of particularly harmful active pharmaceutical ingredients.

If no effective action is taken, AMR is expected to kill 10 million people annually by 2050; it is therefore vital to identify and disseminate national best practice across Europe

Before flying back to Brussels, I also discussed national actions on AMR and pharmaceutical pollution with representatives from the Swedish health and environment ministries, and talked about human rights and transparency in the pharmaceutical supply chain with a representative from Swedwatch.

There is so much to learn from Sweden on how to better tackle AMR and reduce pharmaceutical discharges in the environment; my visit gave me a snapshot of best practice at the hospital level, ahead-of-the-curve initiatives, and promising pilot projects.

It was great to meet enthusiastic, hard-working people who are transforming the healthcare sector towards greater sustainability. I’m proud to be their voice at the EU level, shed more light on their initiatives, and share their best practice within our network of committed members.

If no effective action is taken, AMR is expected to kill 10 million people annually by 2050; it is therefore vital to identify and disseminate national best practice across Europe and to scale up successful initiatives to prevent a post-antibiotic area. This member placement was an enlightening first step in this process. 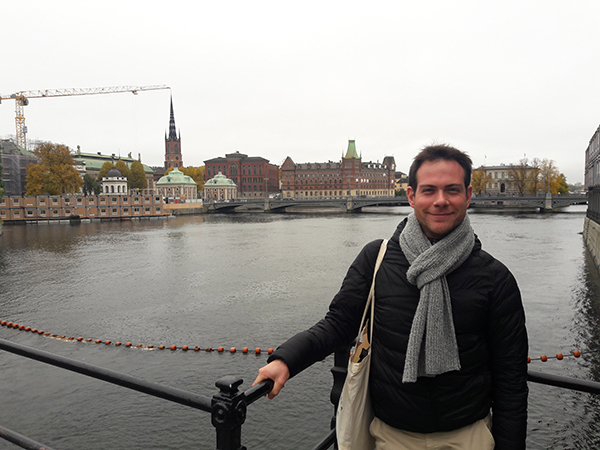 Learn more about the programme here.