HCWH Europe takes note of the political agreement reached by the Netherlands presidency of the Council and representatives of the European Parliament regarding new rules on medical devices and in vitro diagnostic medical devices.

“The agreed two draft regulations are expected to achieve a twofold aim: making sure that medical devices and in vitro diagnostic medical devices are safe while allowing patients to benefit of innovative health care solutions in a timely manner”, according to the Dutch Presidency.

One major concern of HCWH Europe remains the presence of Carcinogenic, Mutagenic and Reprotoxic substances (CMRs) and Endocrine Disrupting Chemicals (EDCs) contained in medical devices. These substances are identified by REACH and are the subject of the forthcoming EDC criteria due to be proposed by the European Commission. HCWH Europe continues to support a clear phase-out of these substance, contained in medical devices, when safer alternatives are available, technically feasible, and do not compromise the safety of patients.

Regarding the present political agreement, it is our understanding that the EU approach to these hazardous chemicals is to support a gradual phase-out.  Their presence will, however, still be allowed in cases where a number of specific conditions are met.

We believe that for the EU to achieve its objective of protecting the health of European citizens and the environment, the justifications for the continued use of CMRs and EDCs in medical devices should be validated by a competent EU agency. An important success factor would also be the precise role of the expert panels and independent laboratories that are to play a key role in supporting the legislative system.

But ultimately, these measures stand or fall by the European Commission’s ability to produce a set of scientifically sound criteria for identifying Endocrine Disrupting Chemicals (EDCs).  Failing this, many EDCs will not be captured and will not be covered by this proposed package.  Relying only on the REACH process to do so has proven ineffective.

“The news of the political agreement reached under the Dutch Presidency on the proposed Medical Devices Regulation is probably regarded by most, especially the negotiators, as a success.  To us there is only one measure for success, it is whether this package is going to eliminate the exposure of patients and healthcare professionals to toxic substances in medical devices.”

The Council's Permanent Representatives Committee will be invited to endorse the agreement probably mid-June 2016. Once the Parliament's ENVI committee has also confirmed that it can accept the compromise the Council will be invited to confirm the agreement. Following the revision of the texts by the lawyer-linguists the two regulations will have to be formally adopted by the Council and the Parliament. The new rules will apply three years after publication as regards medical devices and five years after publication as regards in vitro diagnostic medical devices.

With the support of national NGOs working on EDCs, HCWH Europe have sent personalised letters and a link to our link to our infographic to all the EU member states, targeting both the environment and health ministers.  Emailed copies of these letters were sent to the attachés, the Council officials based in Brussels.  We also drafted personalised letters to all the members of the ENVI committee of the European Parliament.  Given the fact that HCWH Europe already speaks on behalf of its members, we decided to invite national NGOs to co-sign so as to lend additional weight to these letters. 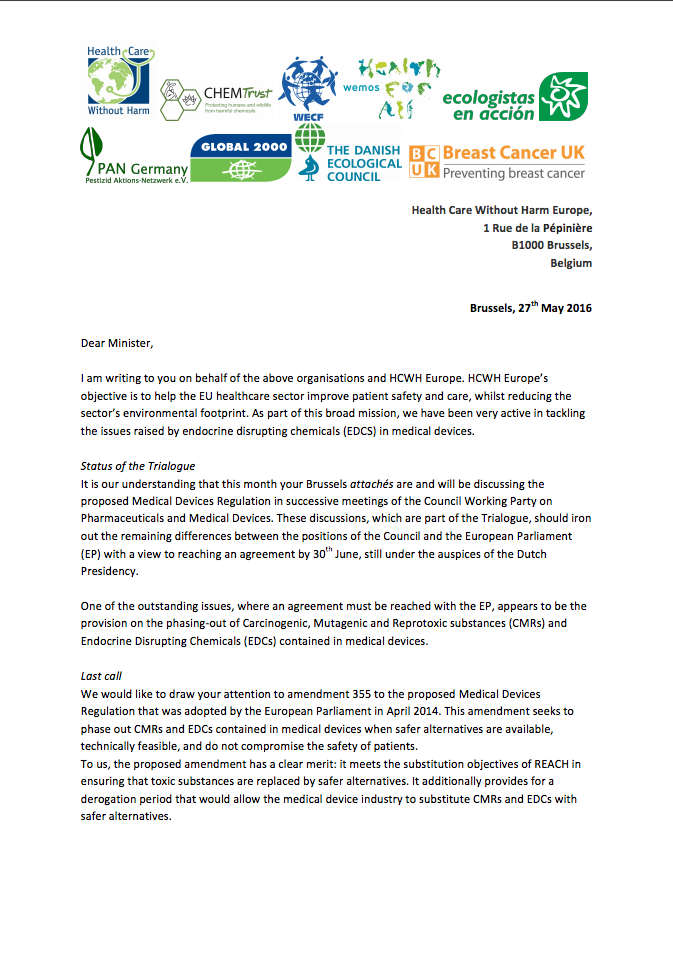 In these letters, HCWH Europe urge the EU to support amendment 355 to the proposed Medical Devices Regulation that was adopted by the European Parliament in April 2014.  This amendment seeks to phase out CMRs and EDCs contained in medical devices when safer alternatives are available, technically feasible and do not compromise the safety of patients.

The proposed amendment has a clear merit: it meets the substitution objectives of REACH in ensuring that toxic substances are replaced by safer alternatives.  It additionally provides for a derogation period that would allow the medical devices industry to substitute CMRs and EDCs with safer alternatives.

This initiative should not only be regarded as a last-ditch effort to influence the EU process, it is also a way to raise awareness and trigger possible national EDC strategies in the likely event of the proposed Medical Devices Regulation falling short of our lowest expectations.