In a letter sent to all MEPs today, HCWH Europe has called on them to put pressure on the
European Commission (EC) to take further action to tackle the growing problem of AMR in
the EU. MEPs will engage in a debate on the Environment, Public Health and Food Safety
(ENVI) Committee Report on the European One Health Action Plan against Antimicrobial
Resistance (AMR), following its presentation by MEP Karin Kadenbach in Strasbourg next
Monday. 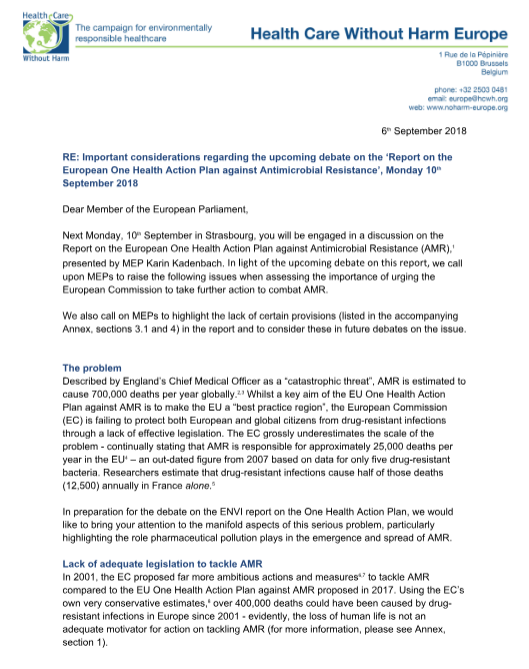 Described as a “catastrophic threat” by England’s Chief Medical Officer, Prof. Dame Sally
Davies - AMR is estimated to cause 700,000 deaths globally per year. Whilst a key aim of
the EU One Health Action Plan against AMR is to make the EU a “best practice region”, the
EC is failing to protect both European and global citizens from drug-resistant infections
through a lack of effective legislation.

The Commission grossly underestimates the scale of the problem - continually stating that
AMR is responsible for approximately 25,000 deaths per year in the EU – an out-dated
figure from 2007 based on data for only five drug-resistant bacteria. Recent research
estimates that drug-resistant infections cause 12,500 deaths annually in France alone.
In preparation for the debate and possible vote on the Report on the European One Health
Action Plan on AMR, HCWH Europe aims to draw MEP’s attention to the manifold aspects
of the serious threat posed by AMR, particularly highlighting pharmaceutical pollution’s
contribution to the emergence and spread of AMR.

In its letter, the organisation draws attention to the fact that current legislation on AMR and
pharmaceuticals in the environment falls far short of the measures needed to adequately
protect human health and the environment. In particular, HCWH Europe once again
highlights the lack of action on the EC’s long-delayed strategic approach to address the
pharmaceutical pollution of water (originally due by 13 September 2015) - an apparent
demonstration of maladministration, which could warrant an investigation by the European
Ombudsman.

Nearly three years after it was due, the EC appears to be unconvinced of the urgent need of
this approach - recent media reports demonstrate a shocking removal and weakening of
key measures from earlier drafts.

The EC’s 2017 Action Plan is also far from adequate, and ignores clear evidence regarding
the role that pharmaceutical pollution plays in the development of AMR. 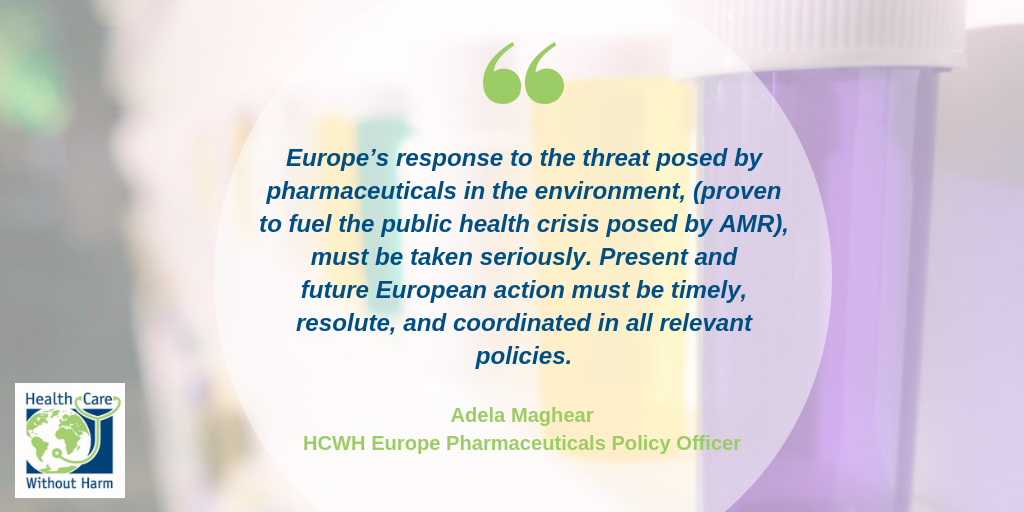 HCWH Europe commends the important steps already taken by some MEPs: proposing
amendments on pharmaceutical pollution in the ENVI Report and calling for the Commission
to appropriately address the issue by proposing effective measures to tackle this serious
problem. We now call on all MEPs to do to ensure that essential legislation is introduced as
swiftly as possible.

Notes to Editors:
HCWH Europe is a non-profit European coalition of hospitals, healthcare systems,
healthcare professionals, local authorities, research/academic institutions and environmental
and health organisations. It currently has 84 members in 26 countries from the WHO
European region, including 17 EU member states. HCWH Europe works to transform the
healthcare sector worldwide so that it becomes more ecologically sustainable and a leading
advocate for environmental health and justice across the globe. We bring the voice of
healthcare professionals to the European policy debate about key issues such as chemicals,
climate change and health, green building, sustainable procurement, pharmaceuticals,
sustainable food and waste management. www.noharm-europe.org