One of the major concerns about the Medical Devices Regulation was that it should address is the presence of Carcinogenic, Mutagenic, and Reprotoxic substances (CMRs) and Endocrine Disrupting Chemicals (EDCs) contained in medical devices. Health Care Without Harm (HCWH) Europe continues to support a clear phase-out of these substances contained in medical devices, when safer alternatives are available, technically feasible, and do not compromise the safety of patients and healthcare professionals.

Whilst the Medical Devices Regulation sets low concentration limits for these hazardous chemicals, their presence is still allowed in cases where a number of specific conditions are met. For example, it will be necessary to show “why possible substance and/or material substitutes or design changes, if available, are inappropriate to maintain the functionality, performance, and the benefit-risk ratios of the product”. Also, the latest text in the Regulation states that “where applicable and available, the latest relevant Scientific Committee guidelines” will have to be taken into account.

HCWH Europe welcomes the explicit reference to these proposed guidelines on phthalates and on other CMR or EDCs to be prepared by the relevant scientific committees. We now look to the Scientific Committee to produce guidelines in line with the latest scientific knowledge and research, taking into account the toxic effects of these substances when absorbed by the human body from medical devices.

In order for the EU to truly protect the health of European citizens and the environment, the continued use of CMRs and EDCs in medical devices will only work if validated by a competent EU agency.

HCWH Europe also welcomes the fact that manufactures will now not only be required to label medical devices containing EDCs, but they will also be required to provide usage instructions for the treatment of patient groups considered particularly vulnerable to such toxic substances and/or materials. 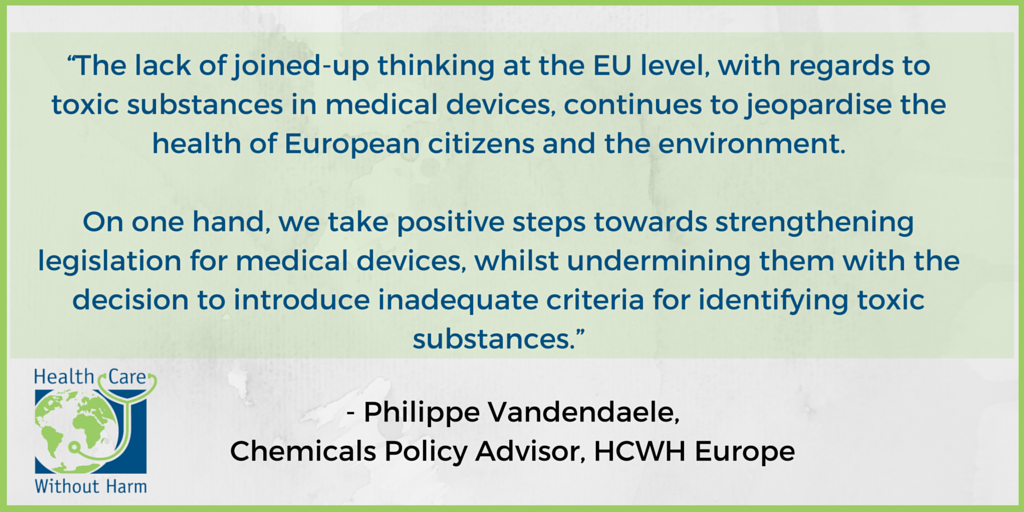 All of the progressive steps outlined in this endorsed text of the Medical Devices Regulation, however, are undermined by the European Commission’s blatantly inadequate set of criteria for identifying EDCs, which are now defined by reference to the delegated Regulation of the Biocidal Product Regulation (BPR) (528/2012) that was presented on 15th June 2016 and by the REACH process.

HCWH Europe is very critical of these criteria, defined by the BPR, as they require such a high amount of evidence that it will be virtually impossible to identify more than fraction of substances posing a threat to human health and the environment from hormone disruption.

These imported criteria will seriously jeopardise the level of protection that the Medical Devices Regulation strives to achieve. This is all the more concerning as continuing to rely on the REACH process to identify EDCs, as mandated by the Medical Devices Regulation, has proven ineffective.  In the EU, under the chemicals regulation REACH, only a handful of EDC substances have been identified and listed on the Candidate List.

Taking this into account, it is highly unlikely that this package of measures is going to eliminate the exposure of patients and healthcare professionals to toxic substances in medical devices. The problems associated with hazardous chemicals contained in medical devices is one acknowledged by the scientific community, yet the process of regulating these hazardous chemicals proves yet again to be influenced by considerations that go beyond health and environmental concerns.

The Council will approve the agreement at ministers' level in September, once the draft regulations have been translated into all official languages. Following their legal-linguistic review, the two draft regulations will then be adopted by the Council and the Parliament, probably at the end of the year. The new rules regarding medical devices will apply three years after their publication.

Health Care Without Harm (HCWH) Europe is a non-profit European coalition of hospitals, healthcare systems, healthcare professionals, local authorities, research/academic institutions and environmental and health organisations. It currently has 75 members in 26 countries from the WHO European region, including 17 EU member states.

HCWH Europe works to transform the healthcare sector worldwide so that it becomes more ecologically sustainable and a leading advocate for environmental health and justice across the globe. We bring the voice of healthcare professionals to the European policy debate about key issues such as chemicals, climate change and health, green building, sustainable procurement, pharmaceuticals, sustainable food and waste management. (www.noharm-europe.org)