A group of twenty organisations – lead by Health Care Without Harm (HCWH) Europe – today sent a Declaration to European Commissioner for Environment, Maritime Affairs and Fisheries, Karmenu Vella, expressing their deep concern about the threat posed by pharmaceuticals in the environment to European citizens, their communities, and the environment. The Declaration comes during World Antibiotic Awareness Week and on the eve of European Antibiotic Awareness Day. 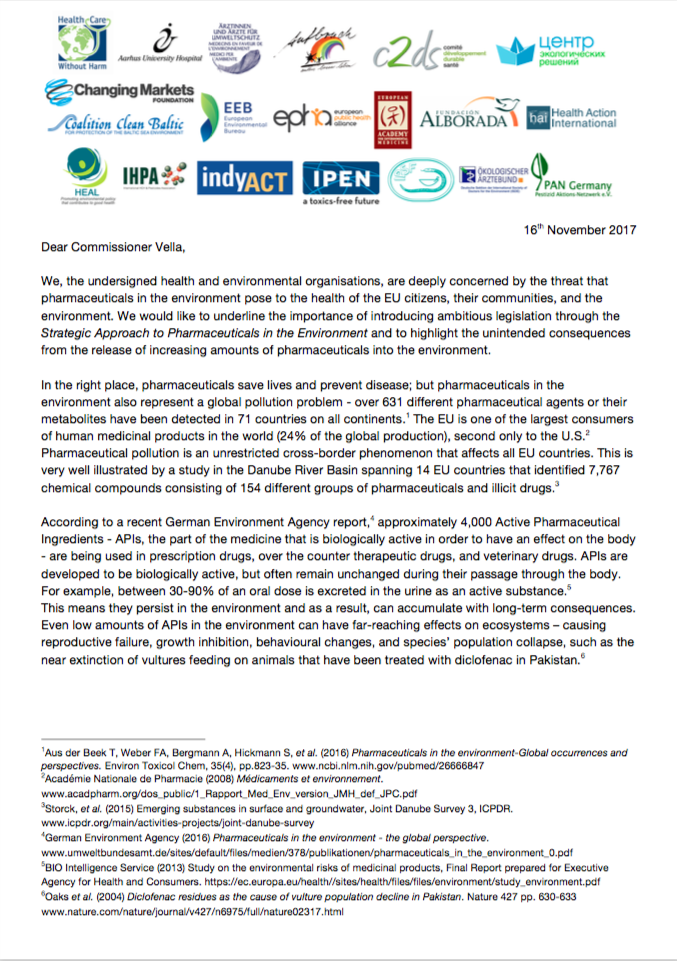 The consortium of organisations, which is made up of hospitals, health organisations, professional health and student associations, and health and environment NGOs, wrote to the Commissioner to highlight the importance of introducing ambitious legislation in the upcoming Strategic Approach to Pharmaceuticals in the Environment (due to be released in early 2018).

The Declaration also highlights the unintended consequences of the release of increasing amounts of pharmaceuticals into the environment on both human and environmental health.

Pharmaceuticals in the environment represent a global pollution - over 631 different pharmaceutical agents or their metabolites have been detected in 71 countries on all continents.

The European Union is one of the largest consumers of human medicinal products in the world (24% of the global production), second only to the U.S. Pharmaceutical pollution, however, is an unrestricted cross-border phenomenon that affects all countries.

“Pharmaceuticals in the environment are a global pollution problem which needs to be addressed immediately. By allowing this known problem to continue we are running a global experiment with no control group. We do not know enough about the long-term and cumulative cocktail effects of small amounts of pharmaceutical residues in our water and food supply and we need to apply the precautionary principle and reduce exposure where possible. We urgently need to minimise the release of pharmaceuticals into the environment at all stages of their life cycle in order to limit the potential damage to human or environmental health.”

Active Pharmaceutical Ingredients (APIs, the part of the medicine that is biologically active in order to have an effect on the body) are designed to be biologically active and often remain unchanged during their passage through the body. These APIs can also enter the environment during the production phase (through wastewater) and when medicines are disposed of incorrectly (by flushing down the toilet or sink).

Even low concentrations of pharmaceuticals in the environment can have far-reaching effects on ecosystems – causing reproductive failure, growth inhibition, behavioural changes, and species’ population collapse, such as the near extinction of vultures feeding on animals that have been treated with diclofenac in Pakistan.

As well as outlining the problems associated with pharmaceuticals in the environment, the group also propose solutions in the Declaration, in the form of a comprehensive set of policy recommendations, stating that:

“We, the undersigned, strongly believe that [these] recommendations should be incorporated into the ‘Strategic Approach to Pharmaceuticals in the Environment’. EU citizens have the right to live in a safe environment in order to prevent sickness and the spread of AMR. We therefore call on the European Commission to consider our position on this issue and take immediate action to protect human and environmental health.”

The Declaration is co-signed by: