It’s day four of World Antibiotic Awareness Week (WAAW) 2017 and every day this week, HCWH Europe is sharing a different resource/publication relating to our work on pharmaceuticals/AMR. Today, the focus is on pharmaceuticals in the environment.

In the right place, pharmaceuticals save lives and prevent disease, but pharmaceuticals in the environment also represent a global pollution problem - over 631 different pharmaceutical agents or their metabolites have been detected in 71 countries on all continents. According to a recent German Environment Agency report, about 4,000 Active Pharmaceutical Ingredients (APIs, the part of the medicine that is biologically active in order to have an effect on the body), are being used in prescription drugs, over the counter therapeutic drugs, and veterinary drugs.

If you are a doctor and would like to find out more about how you can help reduce pharmaceutical pollution, please read our guide here.

APIs are developed to be biologically active, but often remain unchanged and stable during their passage through the body. Between 30-90% of an oral dose of medicine can be excreted unmetabolised in human and animal urine - which means that APIs persist in the environment and as a consequence, can accumulate with long-term consequences. Even low amounts of APIs in the environment can have far-reaching effects on ecosystems – causing reproductive failure, growth inhibition, behavioural changes, and species’ population collapse. The most dramatic environmental effect witnessed in relation to pharmaceuticals was the near extinction of vultures feeding on animals that have been treated with diclofenac in Pakistan.

Pharmaceuticals in the environment are a worldwide pollution problem - threatening the environment and the world’s finite resources, particularly water. Pharmaceutical overuse and pollution has also significantly contributed to the worldwide crisis of antimicrobial resistance (AMR). Each year, AMR infections cause 25,000 deaths in the European Union alone, generating annual costs of at least €1.5 billion, and a total of 700,000 deaths worldwide. 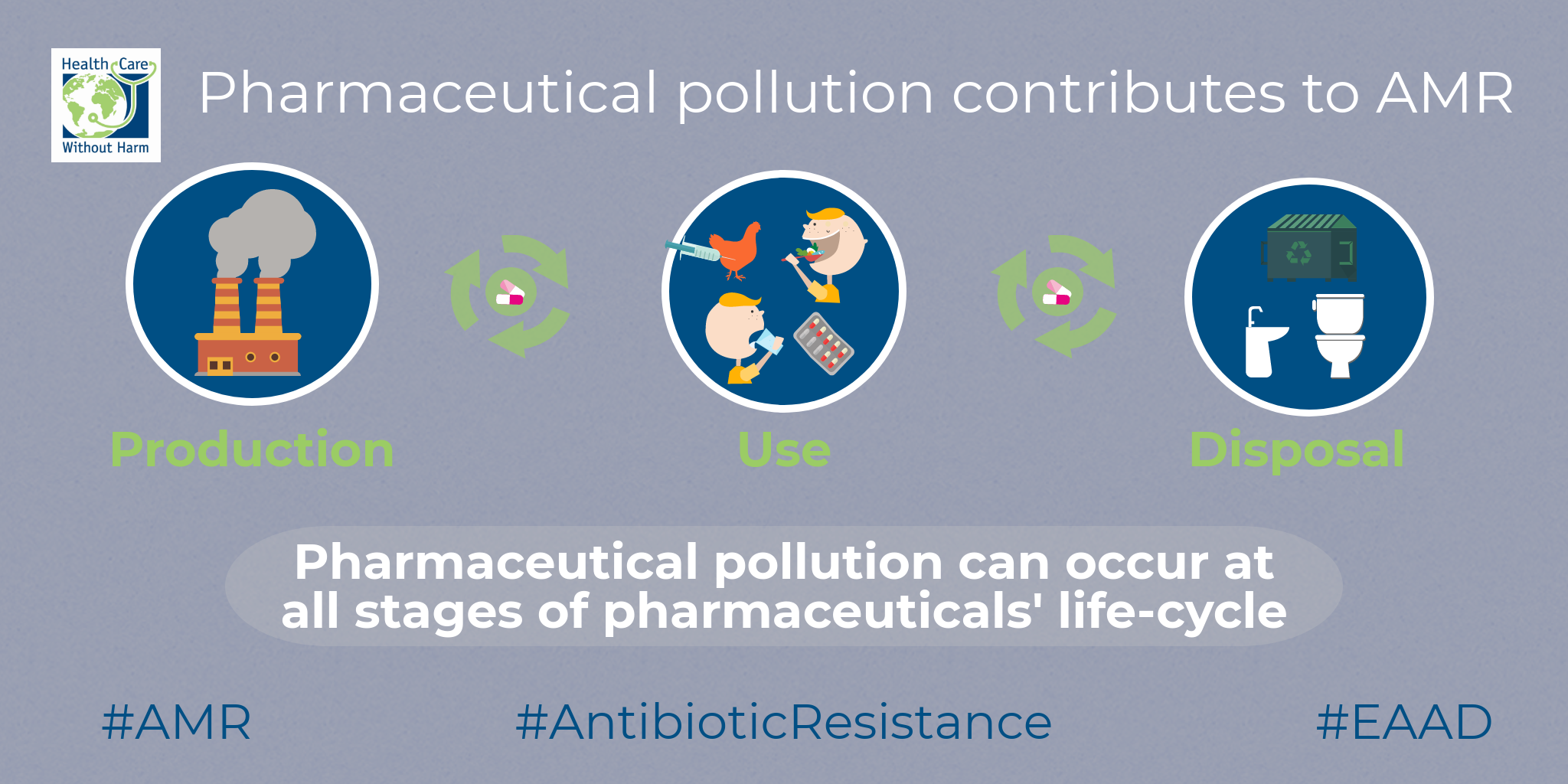 Pharmaceuticals enter the environment at all stages in their life cycle – i.e. in their production (waste from pharmaceutical manufacturing), use (APIs pass through the body and can be excreted in urine), and disposal (unused medicines are often disposed of in the toilet or sink).

We urgently need to minimise the release of pharmaceuticals into the environment at all stages of their life cycle in order to limit the potential damage to human or environmental health. Together, we need to take a One Health, collaborative approach and work with all stakeholders involved to keep antibiotics working.

Each day during World Antibiotic Awareness Week, HCWH Europe will be sharing articles and resources on AMR and Pharmaceuticals in the environment.