For some time now it has been known that medicines enter into the environment through human excretion via wastewater, animal excretion via runoff from agricultural areas, and discharges from aqua culture. Current wastewater treatment plants are unable to completely destroy or remove pharmaceuticals which means they can ultimately end up in surface water, drinking water, soil, and agricultural crops. As a result, humans and animals are constantly exposed to a cocktail of low concentrations of medication at all stages of development.

Recently, a U.S. research group has found that cell cultures exposed to low levels of psychopharmaceuticals (carbamazepine, fluoxetine, and venlafaxine) may alter autism-associated synaptic proteins. The lowest studied effect concentration of carbamazepine and the highest concentration of this drug found in Dutch drinking water are not far apart.

Imported food grown on soil treated with contaminated water and sewage sludge can also lead to exposure to these psychopharmaceuticals and other medicines, moreover, carbamazepine can accumulate in various organs, including the brain.

Because humans and animals share a large number of genes, comparative research into external influences on our genes in animals is useful. The Thomas research group observed that a cocktail of these three psychopharmaceuticals in the brain of young fish activates genes related to autism, Parkinson’s, and multiple sclerosis.

We still do not know what the impact of low dose exposure over a prolonged period is; it would therefore be prudent to apply the precautionary principle and minimise use of drugs where possible, reduce pharmaceutical pollution throughout the life cycle of medicines, and conduct further research, as called for in HCWH Europe’s Safer Pharma campaign.

Legislators need to address this issue urgently; we cannot wait until we have all the facts, but we can already control production, be transparent about sales and use data for both human and veterinary medicine, and improve waste management of pharmaceuticals. 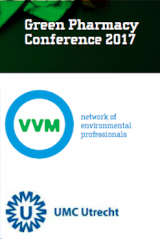 On October 27th 2017, the principal author of this research will give a presentation at The Green Pharmacy Conference - held at the University Hospital in Utrecht to discuss this issue and the approach. For more information visit: vvm.info/greenpharmacy.