As the WHO celebrates its 70th anniversary this year, Dr Tedros Adhanom Ghebreyesus, the Director-General of the WHO opened the 71st World Health Assembly (WHA) this week by describing the achievements of WHO. In the past year, the WHO has responded to 50 emergencies in 47 countries and territories; they’ve recently established the Global Preparedness Monitoring Board, and for the first time, this year’s UN General Assembly has included High-Level Meetings on noncommunicable diseases and tuberculosis. Dr. Ghebreyesus continued by thanking all the partners that supported WHO throughout the years. It was their support that enabled WHO to become “an organisation that can change the course of history”.

Dr. Adela Maghear, HCWH Europe’s Pharmaceuticals Policy Officer, attended the WHA as an official delegate of the International Pharmacy Students Federation (IPSF), where she gave a statement on behalf of IPSF and HCWH during agenda item 11.4 Health, environment and climate change, in response to the Director-General’s Report of the same name.

Within this report, the Director-General stresses the WHO’s intentions to commit to more effective upstream actions in the 2030 Agenda for Sustainable Development and the associated Sustainable Development Goals. He committed the WHO to taking a leading role in engaging with other actors to support the implementation of the public health response to the challenges posed by climate and environmental change. 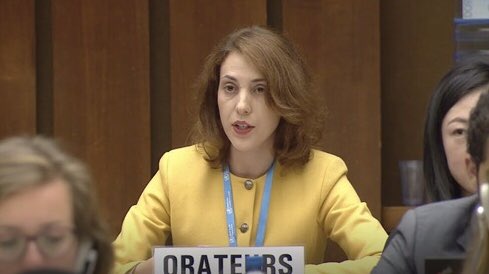 Dr. Maghear went on to emphasise the role of health professionals, in particular pharmacists, in advising patients on the optimal use and proper disposal of medicines to avoid pharmaceutical waste entering the environment. At the same time, Dr. Maghear urged the WHO and Member States to prioritise policies and actions on pharmaceutical waste as an environmental contaminant and to strengthen educational programmes for patients on this issue.

Find a recording of the full statement here under First meeting of Committee A (timestamp 02:21:12)