The crisis of antimicrobial resistance (AMR) is an ever-emerging global concern: increased number of deaths and escalating medical costs for health systems caused by AMR. For these pressing reasons, AMR was at the top of the agenda for the G20 Health Ministers’ meeting in Berlin 19th – 20th May 2017. 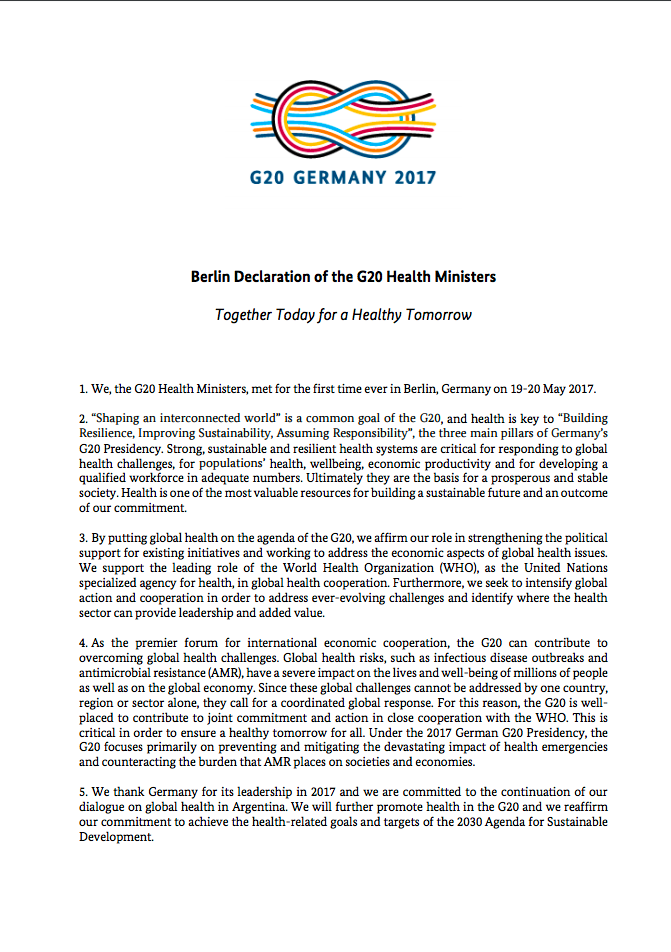 The ministers published a declaration entitled “Together Today for a Healthy Tomorrow”, in this declaration the G20 Health Ministers recognised “the leading role of the World Health Organization (WHO) […] in global health cooperation”.

With the common goal of “shaping an interconnected world” in mind, the G20 declaration acknowledged the major negative impact that AMR could have on public health, hampering both growth and global economic stability. Within the declaration the G20 also made several commitments with the aim of combatting AMR.

Only one third of the 194 WHO Member States currently have national action plans on AMR in place; the G20 declaration aims to build upon the Hangzhou G20 Leaders’ Communiqué, recognising the need for international collaboration to avoid a post-antibiotic era.

The G20 welcomed the United Nations High Level Meeting on AMR in New York September 2016, which urged UN Agencies to take the lead in combating AMR. The G20 Health Ministers made a commitment to support and cooperate with the Inter-agency Coordination Group.

Based on the ‘One Health’ approach (the collaborative effort of multiple disciplines: working locally, nationally, and globally to attain optimal health for people, animals, and the environment), the G20 leaders committed to produce multi-sectoral AMR national action plans (in line with the WHO Global Action Plan on AMR) that will be implemented by the end of 2018. G20 leaders also committed to support one other, and the WHO, FAO, and OIE in implementation and sharing of best practices.

Articles 26 and 27 of the declaration emphasise the need to strengthen surveillance for both antimicrobial resistance and antibiotic consumption. G20 leaders will combine efforts to improve international data collection to be reported in the WHO Global Antimicrobial Surveillance System (GLASS).  Simultaneously, prevention and stewardship campaigns will be set in place to raise awareness on AMR amongst relevant stakeholders to address the five objectives of the WHO Global Action Plan on AMR. In article 27, G20 leaders committed to take immediate action to strengthen infection prevention and control and to promote immunisation and strengthen water quality, sanitation, and hygiene at the international level and they support the involvement of the healthcare facilities in WHO awareness campaign at global level "Save Lives: Clean Your Hands".

Prudent use of antimicrobials

G20 Health Ministers recognised that prudent use of antimicrobials - in both human and animal health, is crucial in preserving the effectiveness of both existing and new antibiotics. They have committed to develop the WHO Global Framework for Development and Stewardship to combat Antimicrobial Resistance. In order to reduce the inappropriate antibiotic consumption, G20 leaders will work to promote the development and support the implementation of antimicrobial stewardship programmes, to improve prescription practices, and to promote appropriate access to antimicrobials when needed. The education and training of health professionals will be further employed to achieve this.

Steps towards addressing antimicrobials in the environment

The ‘One Heath’ approach will be strengthened within G20 and the regular exchange of evidence and science-based knowledge in fields such as human and animal health, agriculture, and environment will be further facilitated. The declaration welcomes Germany’s proposal to host the first expert meeting of public health and veterinary public health experts of the G20 in autumn 2017 and supports the implementation of the AMR actions listed in the G20 Agriculture Ministers’ Declaration and Action Plan. The G20 Health Ministers also engaged to properly address the issue of antimicrobials in the environment.

HCWH Europe welcomes this initiative and calls for a higher level of engagement at international level to ensure that pharmaceutical pollution - an important contributor to the spread of AMR - is taken seriously by major drug producing countries. We also call for the inclusion of environmental criteria relating to manufacturing emissions in any new trade agreements.

In their declaration, the Health Ministers involved expressed their concern regarding the underexplored research and development (R&D) for new antimicrobial therapies, which does not cope with the current global needs. They pointed out the importance of finding new incentive mechanisms to reactivate the R&D for new antimicrobials, but also for alternative therapies, vaccines, and rapid-point-of care diagnostics, in particular for priority pathogens as identified by WHO and for tuberculosis. The importance of having affordable access to all these therapies is also stated.

“Starving the WHO financially will not enable the WHO to play a leading role in protecting the world from AMR.

G20 Health Ministers have therefore committed to extend the voluntary financial support for the existing global and regional product development partnerships and funding initiatives such as the Global Antibiotic Research and Development Partnership (GARDP) - launched in May 2016 by the WHO. As well as other initiatives such as the Drugs for Neglected Diseases initiative (DNDi), UNITAID, the Joint Programming Initiative on AMR (JPIAMR), Combating Antibiotic Resistance Bacteria Biopharmaceutical Accelerator (CARB-X), Innovative Medicines Initiative (IMI), and the TB Alliance for new anti-tuberculosis medicines. The ministers also call on the support of other countries, philanthropic organisations, academia, and the private sector to help achieve this.

“Starving the WHO financially, however, will not enable the WHO to play a leading role in protecting the world from AMR. Therefore the G20 Health Ministers urgently need to involve finance ministers in global health cooperation to achieve the goal of protecting us from AMR” – Anja Leetz, HCWH Europe

In the last article of the G20 declaration, there is a commitment to address tuberculosis within interventions for AMR, whilst recognising drug-resistant tuberculosis as an important threat globally. Health Ministers involved welcome the decision by Member States to hold a United Nations High Level Meeting on Tuberculosis in 2018; they are also in favour of the WHO Ministerial Conference on Ending TB in the Sustainable Development Era which will take place in Moscow in November 2017.

HCWH Europe supports the G20 declaration and commits to contribute to achieving the goals set within, we call on the G20 and other countries to invest in international institutions such as the WHO, but to also implement national action plans. Action is needed: raising awareness among health professionals and the public, supporting public research for new effective antibiotics, and promoting the safe collection and disposal of expired medicines. Data of antimicrobial sales and use in both human and veterinary medicine must be collected to measure impact, and the reporting of such data must be transparent.