Less than a year after the Paris Agreement was made, the day has come – the activation threshold has been reached: 72 countries representing 57% of global greenhouse gas emissions have ratified. This means that on November 4th 2016, the first global climate change treaty will officially enter into force.

The 21st United Nations Conference of Parties (COP21), took place in December 2015 in Paris. 195 nations came together to agree on a global warming threshold of 2°C which is supposed to save us from the worst impacts of a heating atmosphere. The agreement would come into force 30 days after 55 nations, making up at least 55% of total global emissions, ratify the agreement. 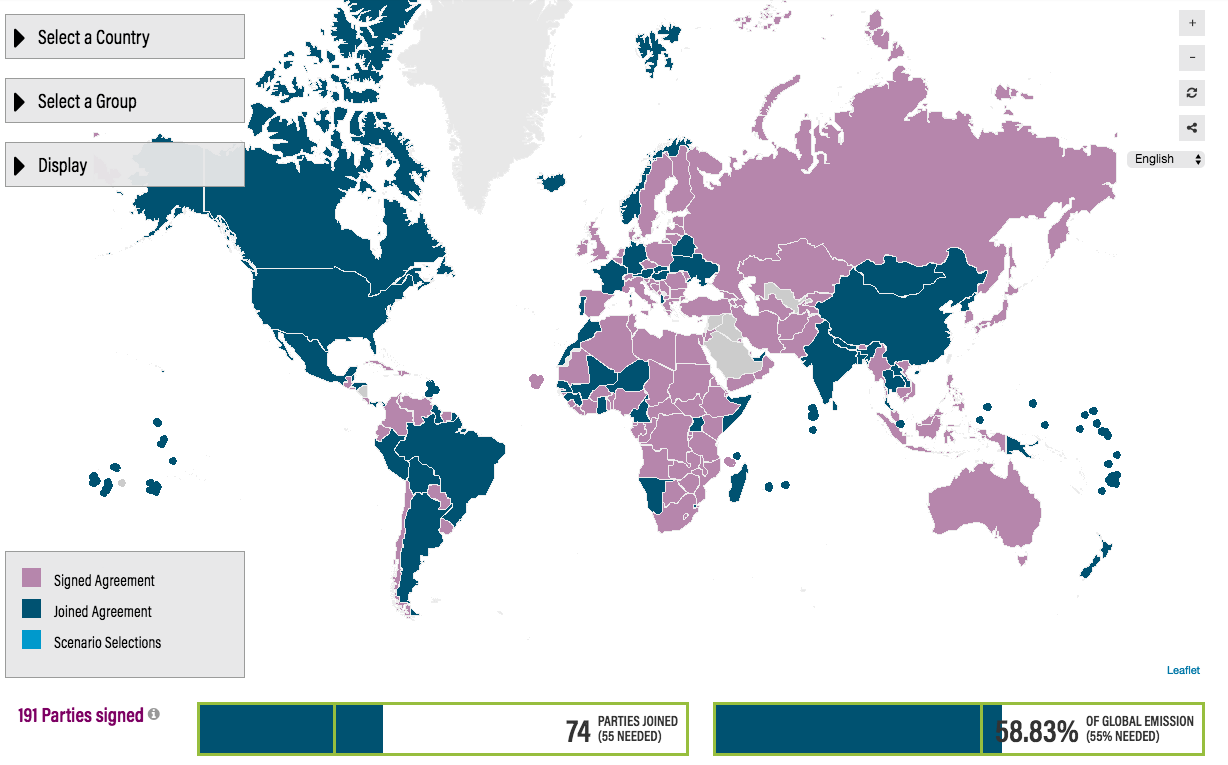 The early ratification of the Paris Agreement is a great victory of international cooperation, and has come surprisingly ahead of schedule: the agreement states that the treaty should be ratified before 2020 but few were expecting a ratification before 2018.

Was the fear of US elections an incentive for global climate action?

The first ray of hope for ratification of the treaty came when U.S. President Barack Obama and Chinese President Xi Jinping ratified on September 3rd during a G20 summit. Together, the US & China are accountable for 38% of global emissions. The bold step of the two largest polluters ratifying on the same day was a massive leap forward for the Paris Agreement, and the turning point that has accelerated the ratification process beyond everybody’s ambitious expectations.

It has been said that the motive behind this impulsive move on behalf of the United States of America, stems from the fear of a potential Trump administration. The republican presidential candidate has vowed to pull the USA out of the Paris Agreement (PA), if he were to become president. The dire global consequences of such a move are clear to the international community; therefore, the USA’s commitment to the agreement is of upmost priority for the future of our climate.[1] Once the PA enters into force, any nation wanting to exit would have to undergo a four year withdrawal period, meaning the USA’s ratification before a (potential) Trump administration is in the interest of all nations.

When the USA and China ratified, they put pressure on all other major powers to follow their lead. The European Union, which accounts for 12% of global emissions, has prided itself on being a strong climate leader, having played a key role in climate negotiations thus far. Even though the EU was anxious to ratify, it was slowed down by the mechanism requiring all 28 Member States (MS), to join individually in order for the EU to join as a bloc.  The EU and its Member States have acted as a bloc in the UN climate negotiations, meaning that the EU speaks with one voice, holds one stance, and sets the same targets for all of its Member States.[2] Under the Paris Agreement, the EU has vowed to reduce GHG emissions by at least 40% by 2030, compared to the 1990 level.

There was growing pressure on the EU to ratify and be the one to activate the treaty. However, as some Member States were lagging behind, the EU decided to carry out a “fast-track ratification” process.  The Environment Council met on September 30th in Brussels, where this fast-track ratification mechanism for the EU was agreed. This meant that the EU could ratify even without the vote of some national parliaments. On October 4th 2016[3] with United Nation Secretary General Ban Ki Moon present at the plenary vote, the European Parliament approved the early ratification of the treaty: opening the doors for the EU to ratify even without some of the Member States having ratified themselves. Because of this decision, the European Union countries that have already ratified were able to contribute to the early activation of the Paris Agreement. The last countries to have ratified were India (4.01% of global GHG), on October 2nd, and New Zealand on October 4th.

Read more about the EU ratification process and requirements on the Carbon Brief.

The Paris Agreement will enter into force 30 days after its ratification; much of the momentum to ratify over the past few weeks was also motivated by aspirations for the agreement to be officially enacted in time for the climate conferences in Marrakesh, which is beginning on November 7th. Thanks to a successful ratification, the COP22 in Marrakesh will host the first meeting of countries who have ratified, and who will now start the decision-making process to address key issues regarding the implementation of the treaty.

Paris Agreement and the health sector

HCWH Europe applauds the European Union for the successful  “fast-tracked ratification”, that will accelerate efforts to protect us from the most devastating impacts of climate change.

The health sector must also take responsibility by reducing its contribution to the exacerbation of climate change. Globally, many individual hospitals and healthcare centres have already made progress towards reducing their own carbon footprint, but there is still much more work to be done. As such a large producer of CO2 emissions, and representing a large chunk of many European nations GDPs, the European healthcare sector can send a powerful message to governments and policy-makers on the effective implementation of the Paris Agreement. As world leaders convene in Marrakech to map out strategies to achieve the climate goals agreed upon in Paris, Health Care Without Harm and The Mohammed VI University Hospital of Marrakech are pleased to host the Climate and Health Care Conference, to emphasise the important role the health sector must play in mitigating climate change.

Register to attend our Climate & Health Care Conference in Marrakech, on November 14th 2016.