Every Monday this month, Health Care Without Harm (HCWH) Europe has been sharing meat free facts to coincide with the Friends of the Earth Meat Free May campaign, and the UK NGO Meat Free Mondays.  This week in May also marks the Vegetarian Society’s National Vegetarian Week 2016 (16-22 May). HCWH Europe have taken this combination of events as an opportunity to raise awareness about our eating patterns and our dependency on animal protein.

The topic of meat eating is multi-faceted, there are many aspects to consider: the ethics, the environmental impact, socio-economic sustainability, and its consequences on health are well known and have all been discussed in a number of publications.2 3

In most parts of the world, meat consumption has nearly doubled in the last 50 years, reaching around 65,000 million animals killed and consumed annually.

All of this equates to an­­ annual average of 9 animals killed per person,4 without taking into account future predictions of population growth and consequent growth of meat consumption.5 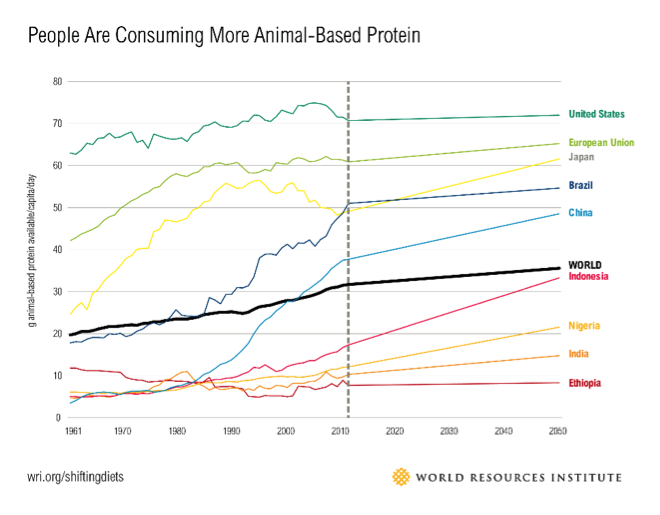 To avoid future strains on resources and further damage to the environment from meat-production, important changes are needed. We have two options:

The second option should be seen as an opportunity to learn about and consider all the plant-based alternatives – vegetables, fruits, pulses (such as beans, lentils, chickpeas), nuts, seeds, and wholegrain foods. An added bonus of such an action is adopting diets high in fibre, minerals, and vitamins will help reduce risk for heart diseases or diabetes, whilst also improving the sustainability of food systems.

Recent studies show that a global switch to diets that rely less on meat and more on fruit and vegetables could save up to 8 million lives by 2050, reduce greenhouse gas emissions by two thirds, and lead to healthcare-related savings and avoided climate damages of $1.5 trillion (USD).7

Consuming 40 kg meat per year (i.e. half of the current average) is equal to approximately 110 grams per day, and would have a far smaller negative impact on the environment than current levels.4 110 grams may seem like a small amount, but some dietary guidelines already recommend eating less than 500 grams of meat a week - approximately 70 grams per day.8 9 The good news for carnivores is that they can still eat meat and animal products and reduce their impact on the environment, but only if they reduce their consumption by at least 50%. 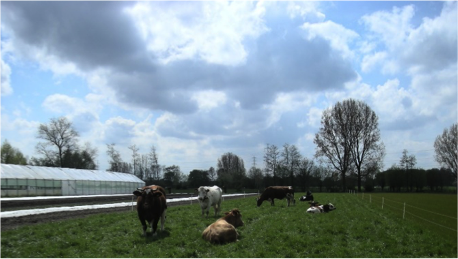 The healthcare sector is already encouraging an important reduction in meat consumption. Some hospitals are implementing meat reduction strategies, reducing the amount of meat served, serving smaller portions of red meats and poultry, increasing the availability of healthy plant-based foods, enriching meals with larger portions of fruits, vegetables, and grains, focusing more on other forms of protein, such as fish and pulses, and hosting Meatless Mondays.

"A naturally good plate can be defined as a plate that has fresh and seasonal food, contains little meat or fish, and uses little packaging”
- The Vienna Hospital Association.

For Cuisines Bruxelloises (Brussels Kitchens), which serve approximately 2 million meals per year in hospitals and care homes in Brussels, replacing or reducing meat is not only better for the environment, but it also reduces costs. This has also been seen in the Karolinska University Hospital in Stockholm (more informaiton in the upcoming HCWH Europe sustainable food report).

Money saved from reducing the amount of beef or pork purchased can be spent on improving the quality of produce, as the University Hospital Complex in Santiago de Compostela (Spain) is doing in order to provide fresh fish from local suppliers protecting traditional fishing techniques. This gained surplus of money is also spent on meat with a higher standard of animal welfare and the Protected Designation of Origin, such as “Ternera gallega” (more information in the upcoming HCWH Europe sustainable food report).

Saved money from smaller meat purchases will also allow hospitals to buy more organic and fair-trade products. A reduction in meat should go beyond patients’ food: hospital cafeterias for both visitors and staff are also encouraged to offer menus and sandwiches with more vegetables and pulses and less meat and dairy ingredients.

Making food healthier to nourish patients and staff in hospitals, paying particular attention to reducing meat consumption, should be a priority to make people and the planet healthier.

(1) Sustain (2016). Get ready for National Vegetarian Week and Meat-Free May. http://www.sustainweb.org/news/apr16_celebrate_meatfree_may

(2) Heinrich Böll Foundation and Friends of the Earth Europe. (2014). Meat Atlas: Facts and figures about the animals we eat. https://www.foeeurope.org/sites/default/files/publications/foee_hbf_meatatlas_jan2014.pdf

(4) Documentary – Should I eat meat? How to feed the planet by the BBC UK in collaboration with Dr. Michael Mosle. https://www.youtube.com/watch?v=omu1sVQBoAM