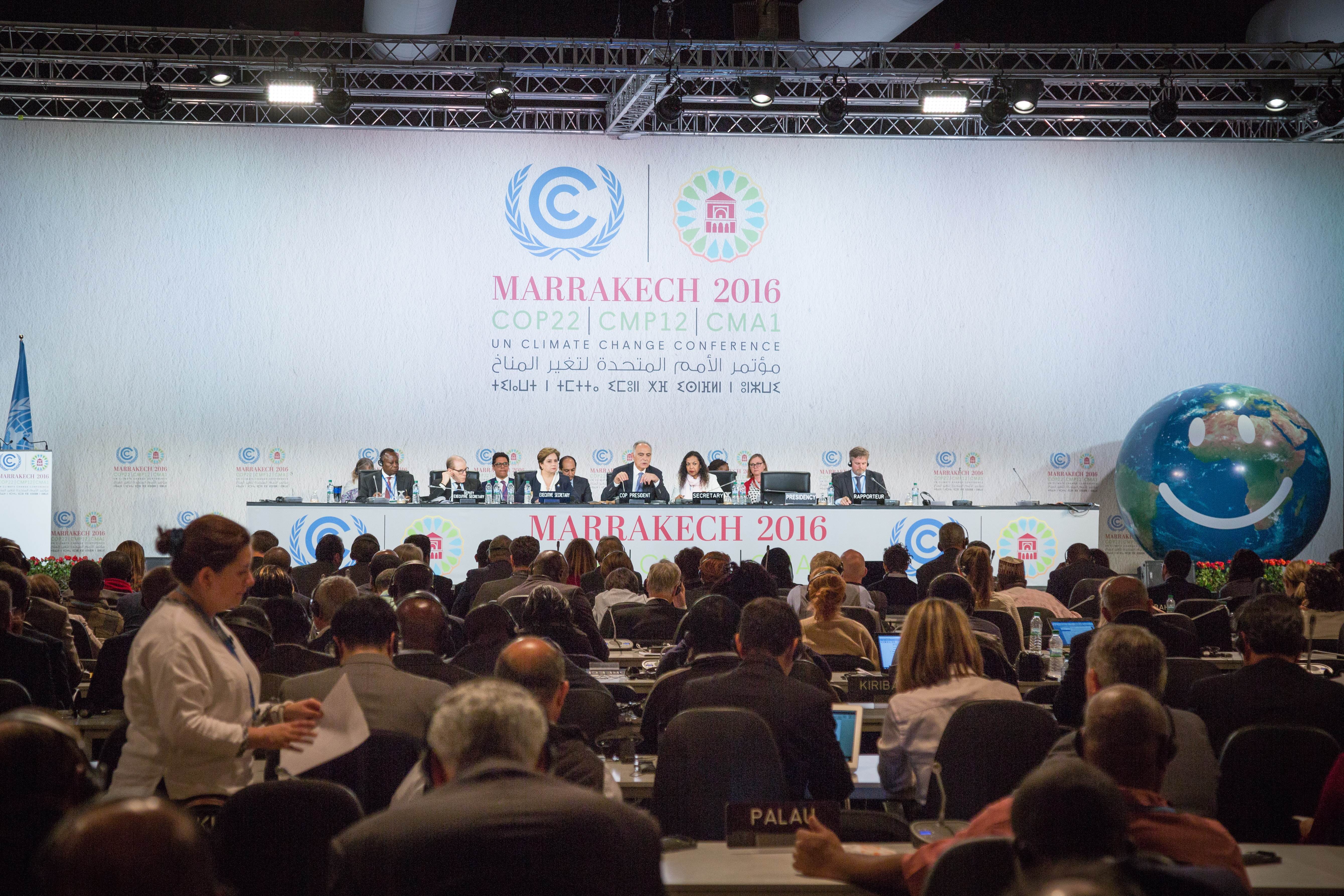 The focus of COP22 was heavily directed at action and the implementation of the Paris Agreement. This year’s climate negotiations were expected to establish rules for how to lower, measure, and report greenhouse gas (GHG) emissions. Countries were expected to develop concrete plans for implementation, and for scaling up support for loss and damage due to climate change. Yet possibly the most important topic discussed in Marrakesh was the need for higher ambition for GHG reduction targets.

The Paris Agreement was considered a great success and a major achievement, marking the beginning of truly international climate action. However, over the past year, it has become evident that the collective ambitions of all the Nationally Determined Contributions (NDCs, national GHG reduction pledges) are not enough to meet the Paris Agreement’s target of keeping global warming well below 2°C. This loomed over COP22, and was used as the key argument to put pressure on national representatives to become more ambitious before 2020.

COP22 set out to tie up the loose ends of the Paris Agreement. While we had hoped that countries would revise their national pledges this year, it was decided that nations must submit their updated NDCs in 2018. A key debate at COP22 was around how to create a “Paris rulebook” for countries to be able to assess their climate pledges. Technicalities such as the methodology and baselines are expected to be defined by 2018. The official outcomes of COP22 are collected in a series of documents, covering terms of reference for loss & damage, capacity building, long-term climate finance, national adaptation plans, and much more. All of the documents can be found here on the UNFCCC website. Read more about the outcomes of COP22 and expectations for future negotiations on the Carbon Brief website.

The Marrakech Action Proclamation, which was issued by heads of state who were present at COP22 signals “a shift towards a new era of implementation and action on climate and sustainable development”. Issued only days after the results of the US elections, this proclamation was welcomed by the international community and sends an important political signal of the global commitment to the Paris Agreement and the 2030 Sustainable Development Agenda. 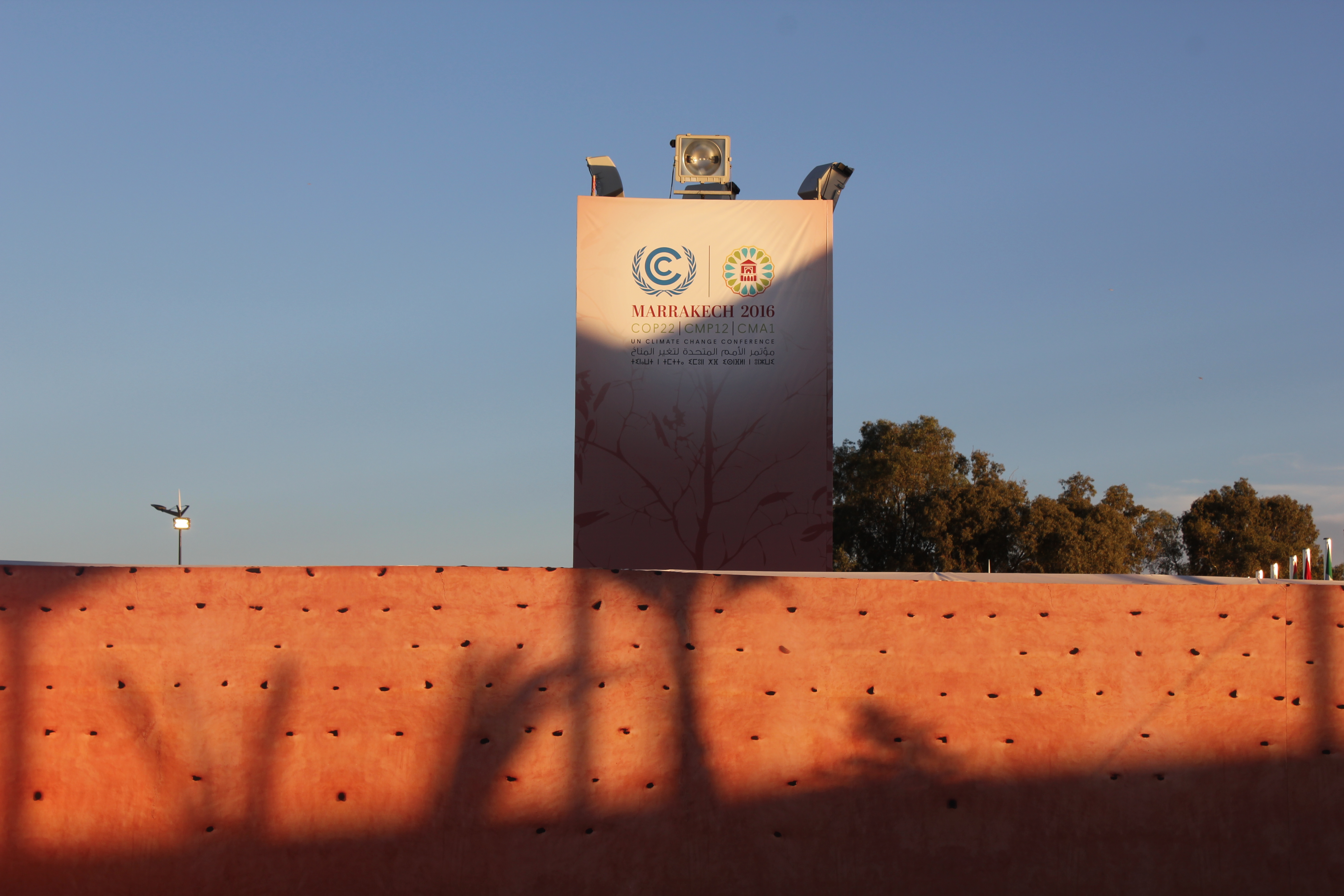 You can watch all of the COP22 events recorded on the UNFCCC website here.

At this year’s conference, it was announced that the presidency of COP23 has been assigned to Fiji. However, due to lack of capacity in the Pacific island to host the negotiations, it will take place in Bonn, Germany, which is home to the UNFCCC headquarters. COP24 will take place in Poland.

During COP22, the EU emphasised its efforts and achievements in boosting the european renewable energy market. During the final EU press conference at COP22, Climate and Energy Commissioner Miguel Arias Cañete outlined the EU’s ambition to be “number one” in renewable energy. He affirmed that the EU will source half of its electricity from renewable sources by 2030, and will be 100% carbon-free by 2050.

“The European Union is very much attached to develop capacity in countries so they are able to establish the better strategies adapted to their special conditions, because not ever country is the same as its neighbour…there is no one-fits-all solution” - Commissioner Miguel Arias Cañete

The EU: a climate leader?

Although the EU may be ahead of the game in the transition to renewable energy, there is a great deal of dissatisfaction with Europe’s climate ambition. The EU has been claiming to play a strong leadership role throughout climate change negotiations over the years, yet a close look at the actions being taken at EU level today, and particularly the weakness of energy policies, suggests otherwise.

Leaked copies of the proposed EC energy legislation, which are part of the Winter Package due to be released on November 30th, reveal weak efforts to raise clean energy targets. The current renewable energy target of 27% by 2030 is too low to comply with the Paris Agreement. The revision of the energy package provides an opportunity for the EU to raise this target, yet as revealed though the leaked draft, the revision of the Renewable Energy Directive will not take this opportunity. If the EU wants to fulfil its promise of leading the way in terms of renewable energy, the Climate & Energy Package needs to be significantly improved.

The EU missed another opportunity at COP22 to boost climate action and be a true leader in the fight against climate change, by expressing no intentions to cancel the surplus allowances under the Emissions Trading Scheme (ETS). There has been an enormous surplus of emission allowances due to a weak reduction target in the EU and the use of international offsets. Consequently, the price of allowances has dropped so much that it no longer drives change. Putting an end to this ETS loophole would have been an easy step forward, but there is still time for the EU to step up.

On December 8th, the European Parliament Committee on Industry, Research and Energy (ITRE), and the Committee on Environment, Public Health and Food Safety (ENVI) will vote on their position on the ETS. This is an important vote since the ENVI committee will have a strong influence on the ETS position of the Parliament as a whole. Read more about the ETS, and sign this petition calling for polluters to be held accountable for their emissions.

Although we had hoped to see more progressive action from the EU during COP22, we are glad to see the EU re-affirm its commitment to the Paris Agreement and emphasize its objective to accelerate low carbon growth in the economy. The EU also stated its commitment to developing long-term strategies in 2018, noting that many Member States are already coming forward with long-term plans for decarbonisation.

Germany published its 2050 decarbonisation plan on November 14th. This is a significant first step for Germany’s implementation of the Paris Agreement. Germany is the first country to adopt a detailed long-term decarbonisation plan. The plan sets important reduction targets for 2030 for individual sectors including; power, buildings, industry, transport, and agriculture. German Environment Minister Barbara Hendrick presented the plan in Marrakech. Read more about the plan here.

The UK ratified the Paris Agreement on 17th of November, during COP22. The ratification was signed off on by foreign secretary Boris Johnson, who has expressed his scepticism of climate change in the past. The UK had already joined the Paris Agreement through the EU, yet their national ratification was still celebrated at COP22. Opposition politicians urge the UK government to transform this commitment into climate action.

Another milestone that took place at COP22 was the Ministerial meeting on Health, Environment and Climate Change. Health and environment ministers of countries around the globe gathered at COP22 to sign an official Declaration on Health, Environment and Climate Change. The declaration addresses the comprehensive linkages between health and our environment, and recognizes the enormous work and political action that must be taken to better address the health impacts of climate change.

By shining a spotlight on the vulnerability of human health to climate change, ministers have taken the opportunity to emphasise the protection of health as being at the heart of the climate change solutions. The declaration expresses that “…health gains are among the most socially and economically valuable benefits of environmental and climate protection, and therefore strong motivating forces for public support and political action...” The coalition has committed to reducing the annual 12.6 million deaths caused by air pollution each year. To achieve this, the declaration encourages more inclusive collaboration between environment and health sectors to exchange experiences and work together towards climate change solutions. The importance of bridging efforts between environment and health professionals is an essential collaboration to protect human and environmental health. This is the first high-level alliance that exists to specifically focus on this.

The World Health Organization (WHO) had a strong presence at COP22, where it took the opportunity to actively raise awareness about health issues that are proliferating worldwide as a result of climate change. On Friday 11th November, WHO hosted the “Health Actions for the Implementation of the Paris Agreement” conference, where the issue of air pollution was a key topic of discussion. WHO presented the BREATHELIFE campaign, which seeks to mobilise cities and protect individuals from the effects of air pollution. The BREATHLIFE website presents a practical tool that assesses your city’s pollution levels. At the conference, Health Care Without Harm (HCWH) Global presented the international Global Green and Healthy Hospitals (GGHH) network. Read more about this event here.

Health Care Without Harm (HCWH) travelled to Marrakech to bring the voice of the  healthcare sector to the climate change negotiations. On November 14th, HCWH, together with the Mohammed VI University Hospital (a GGHH member) hosted the Climate and Health Care Conference in Marrakech. 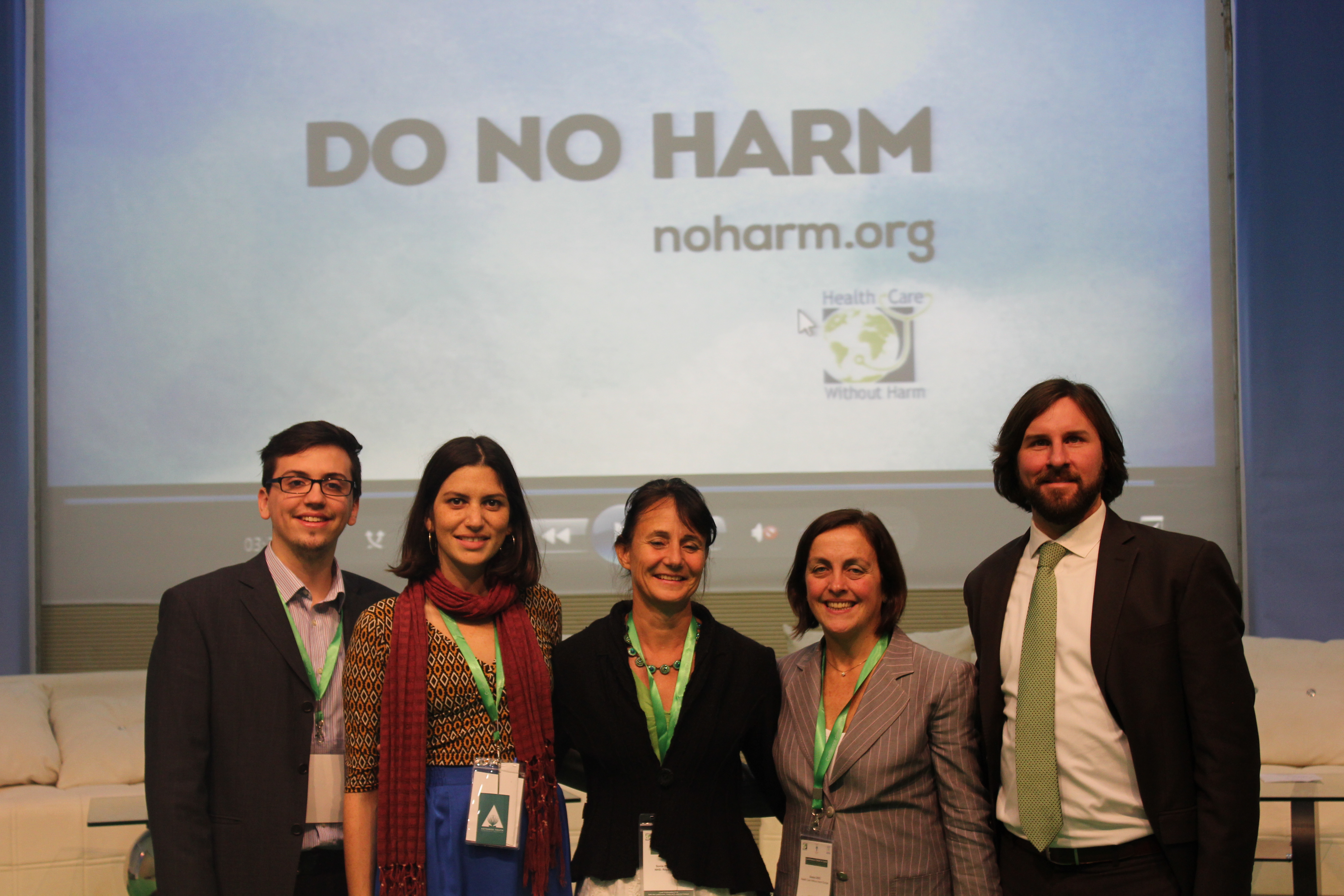 The event, which was the first of its kind to be held in the country, brought together health sector leaders from around Morocco, Europe, and beyond to share strategies for the health sector to mitigate its own climate impact, develop low carbon models of care, and use their voice, both individually and collectively, to advocate for policies to address climate change and public health. Read more about the Climate and Health Care Conference here.

Through the 2020 Challenge, which was launched in the lead-up to Paris, HCWH aims mobilise healthcare institutions around the globe to protect public health from climate change. The challenge continues to grow, and today it is a place where 129 leadinghealthcare institutions, representing the interests of more than 9,000 hospitals and health centers on every continent, have come together to provide this leadership and commit to to a combined annual reductions of 12 million metric tCO2e by the year 2020. 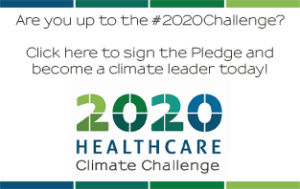 Between now and 2020, HCWH aims to continue to build the 2020 Challenge and engage institutions representing more than 50,000 hospitals and health centers committing to annual reductions of 200 million tCO2e.

Find out more about our GGHH network and the 2020 challenge here. 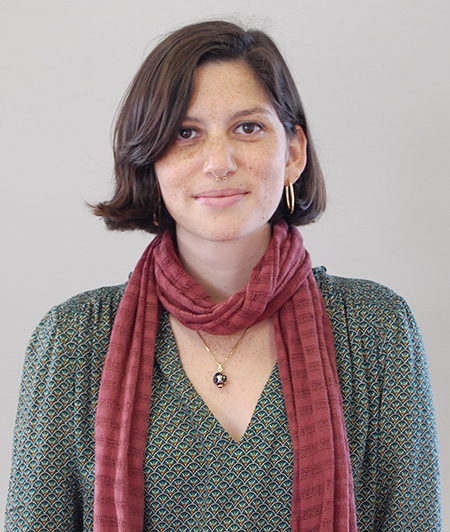