Health Care Without Harm (HCWH) Europe's Climate Policy and Membership Officer Kornelia Bagi is in Lima, Peru for the UN Climate Conference (COP 20). Read Part III of her COP 20 Diary below. Parts I and II are also available online.

All eyes are now on world leaders as the joint COP/CMP high-level segment kicked off on Tuesday morning. Apart from the political statements, the ADP contact group on item 3 focused on a draft COP decision on advancing the Durban Platform for Enhanced Action. Informal consultations under the COP and CMP took place throughout the day. In the afternoon, a ministerial roundtable on climate finance was convened.

We heard at the WHO side event on Monday that all the UNFCCC negotiations are about health, as the outcome will inevitably affect our wellbeing. With this in mind, I was curious about how health arguments would appear in the high-level statements.  In other words will health be on par with the polar bear - the poster boy for climate change? (Spoiler: no, it won’t.) Let’s see what they (with a view to the EU and some of its Member States) spoke about.

They basically patted themselves and each other on the back. Also, the subsequent contributions gave the impression that speechwriters and advisors relied too much on the media advisory of the UNFCCC.

Many speeches referred to the urgency of the situation, citing the findings of the Fifth Assessment Report (AR5) of the IPCC, calling for accelerated action. At the same time contributions had a surprisingly positive tone, including the opening remarks of Christiana Figueres, demonstrating a willingness to take the necessary decisions and high hopes towards next year’s agreement. Most contributions called for a binding and balanced agreement that ensures common action with the participation of all countries.  Meaning: nobody wants to be a hero on this. All EU speakers (including Poland) stressed the ambitious nature of the 2030 agreement and the minimum 40% domestic GHG reduction target.

The only world leader who actually mentioned that climate action would lead to healthier societies was UN Secretary General Ban Ki-moon. He echoed most of the talking points listed above, while also stressing the role of stakeholders, including civil society, in promoting action. He also expressed concerns that the collective action would not match our common responsibilities and in order to have the necessary outcome, he laid out a five-point action plan for Lima.

Can we conclude that health is not sexy enough for the climate change agenda? Probably not, but as we drift away from health-related events, health is losing its momentum. There is a lot to be done before Paris. 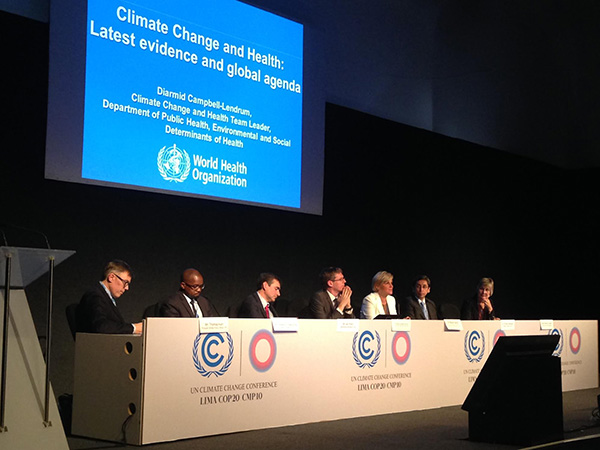 The high-level segment will continue on Wednesday 10 December (that also happens to be Human Rights Day) so I will try to learn more about the role of education and communication in delivering effective climate action and also about gender mainstreaming in the energy sector at dedicated side events (the latter being organised by our member, Women in Europe for a Common Future, WECF).

Outside the closed venue (not far from the negotiations) Latin America’s largest ever climate march will take place to remind the negotiators about their responsibility.

The momentum is still there with high expectations towards the COP 21 agreement. Although speakers today were a bit more careful with the level of optimism and they didn’t give the impression that the deal is already in the bag anymore.

Compared to yesterday’s arguments, many delegations stressed the opportunity that the negotiations offer to transform the challenges posed by climate change poses into opportunities (with the help of technology and finance).

The health co-benefits of climate action were highlighted by both Ban Ki-moon and Sweden (the Minister also threw energy security into the pool of arguments).

Education and communication as cornerstones for effective climate action

The annual event organized by the UN Alliance on Climate Change Education, Training and Public Awareness showcased the work of its members on advancing the implementation of the Doha work programme on Article 6 of the UNFCCC Convention. Since climate change was earlier identified as an educational challenge, it is vital to provide access to information and translate science into everyday language. 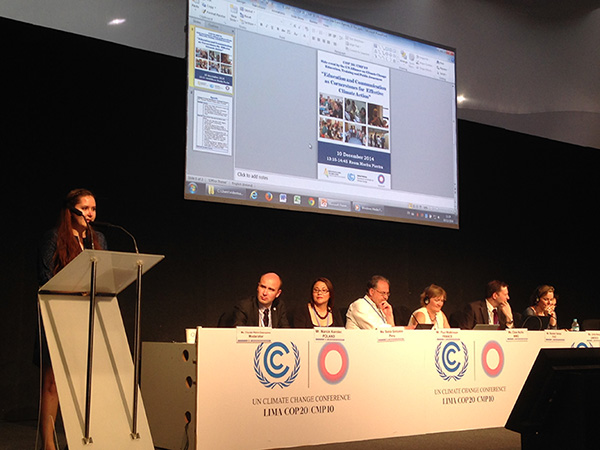 Tomorrow the high-level segment will draw to a close. NGOs will have the (very limited) opportunity to take the floor in the afternoon. Read about the outcome in the next part of my COP 20 Diary.